How to Promote your Dictionary

When so many people merely refer to looking something up in “the dictionary”, publishers find it hard to market their dictionaries as distinctive products. The similarities of competing products that lead naive users to conflate them into one universal work is a high barrier to individual promotion and brand recognition. All dictionaries record the same language, using evidence gleaned from closely similar sources; they have identical problems of fitting an inchoate mass of facts into a work that’s both easy on the buyer’s arms and not too hard on his pocket. Once you’ve added mini-encyclopaedia entries and guidance on style and grammar and you’ve worked and reworked the design of the pages to make them as attractive as possible, what more can you do to persuade people that yours is better than the competition’s? 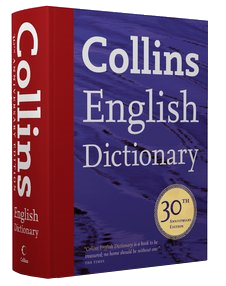 On 3 September 2009, Collins, one of the big three British publishers of dictionaries, together with Oxford and Chambers, brought out the 30th anniversary edition of their heavyweight single-volume Collins English Dictionary. They’ve been highly successful in getting their name before the public in that most valued of promotional media, editorial coverage.

The publicity drive started more than a year ago. In a stroke of near-genius, Collins publicised a decision by its editors that 24 antique words should be removed to make room for new stuff. It persuaded newspapers to run a campaign to ask the public whether they were loved enough to be kept. Enough support was gained for embrangle, to be confused, apodeictic, beyond dispute, fubsy, short and stout, compossible, able to coexist, and skirr, the noise of birds’ wings in flight, for a another burst of publicity in Spring 2009 to say they had been reprieved.

Another campaign was launched in late 2008 to get the public to nominate words for inclusion in the anniversary edition. Erin Whyte, from Nottingham, suggested meh, which she said was “an expression of utter boredom or an indication of how little you care for an idea”. More recently, the news that Twitter was to be added, as noun and verb, made a useful press teaser back in July.

In the first week of September 2009 the publicity machine went into high gear with the publication of the work itself and of the full list of some 270 new words and phrases that have been included.

Yes, meh is there. The new edition is strong on interjections, because they turn up a lot on social networking sites, where they have displaced emoticons. Including them also shows the high level of current interest among lexicographers in online vocabulary. Joining meh are hmm, a sound made when considering or puzzling over something; heh and heh-heh, indicating sly amusement; mwah, the sound of a kiss; woohoo, a cry of joy or approval; and woot (often written wOOt), a slang term that’s especially popular among players in online games as a shout of joy or victory. 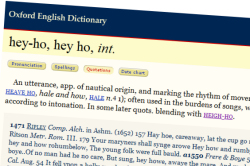 Much has also been made in the press of the inclusion of heigh-ho (or hey-ho), a noise that suggests weariness, disappointment, surprise or happiness, which Collins editors suggest went out of fashion in the early twentieth century but which recently returned to use. I’ve been using it for decades — perhaps I belong in the nineteenth century? But I don’t think it ever really went away — it turns up in Buffy the Vampire Slayer, in various works by Douglas Adams, in John Le Carré’s Smiley novels and in lots of earlier twentieth-century works, even if you ignore its currency in song lyrics.

Alongside these are other abbreviated forms: defo, definitely, a British way to indicate agreement or consent; ish, reservation or qualified assent; and soz, another British interjection meaning sorry.

Despite the tenor of the press coverage, many sensible words and phrases are included among the 270 new terms. An unrepresentative short list is anatexis (the partial melting of rocks), bad bank (a financial institution set up to control and manage underperforming assets owned by other banks), cloud computing (a computer term for services stored on the internet), embryo vitrification (a method of in vitro fertilisation), quantitative easing (increasing the supply of money to stimulate economic activity), social intelligence (the ability to form rewarding relationships with other people), and synthetic biology (the application of computer science techniques to create artificial biological systems).