The classic Cinderella story remains so widely known that the phrase glass slipper still achieves instant recognition. It is sometimes used as an emblem of appropriateness:

It is also back in its original frame, which was found at Houghton with another picture inside it, but fits the Poussin as perfectly as a glass slipper fits a princess’s foot.

Readers of the story have often been puzzled by the glass slippers, the ones that Cinders’s fairy godmother gave her to wear at the ball. Such fragile and potentially dangerous wear, unknown in everyday life, surely could not have been what was intended?

Succour for such doubters has been provided in the past century by writers who claimed that glass slipper was a mistranslation of the French story on which our modern versions are based. They say that the slippers were really made of vair, a type of fur that’s called miniver in English, not of verre, glass. Explanations along these lines have appeared at various times in standard works such as the Encyclopaedia Britannia, Brewer’s Dictionary of Phrase and Fable and the Oxford English Dictionary.

Alas, this attempt to prove the story to be a popular etymology is itself a popular etymology. All modern authorities are certain that the slippers were indeed made of glass, though this hasn’t prevented the false story continuing in circulation. 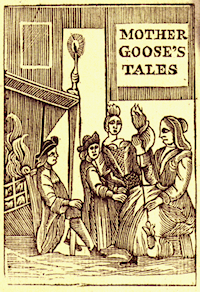 The frontispiece of Perrault's Histoires, reused for an English edition in 1763.

The Cinderella story is one of eight in Charles Perrault’s little book, whose title is Histoires ou contes du temps passé (“stories or tales of times past”). It was translated into English in 1729 by Robert Samber. The French and English versions both proved immensely popular. As well as the Cinderella story, it included those of Babes in the Wood, Bluebeard, Puss in Boots, Tom Thumb, Little Red Riding Hood and Sleeping Beauty. The frontispiece shows an old woman sitting spinning and telling stories, with the caption “Contes de ma mère l’Oye” (“Tales of Mother Goose”) and so such children’s fairy tales are often called Mother Goose stories.

As with the others in his collection, Charles Perrault was recording an oral folktale current in France at the time, in this case an eternally resonant tale of unjust oppression followed by joyful reward that folklore experts have traced back through hundreds of versions as far as China in the ninth century. Perrault actually wrote of the fairy godmother that “elle lui donna ensuite une paire de pantoufles de verre, les plus jolies du monde” (“she then gave her a pair of glass slippers, the prettiest in the world”), so Samber’s translation is correct. Perrault was following the tradition of giving Cinderella costly and impractical footwear. In 1812, the Brothers Grimm wrote a German version, Aschenputtel (“ash fool”), closer in spirit to the darker and much more violent traditional rendering; in theirs the slippers on successive evenings were of white silk, silver and gold.

As well as introducing the fairy godmother, Perrault seems to have invented the idea of making the slippers of glass. In doing so he had to leave out an important aspect of the traditional story, in which one ugly sister cut off her toes and the other her heel to try to fit their feet into the dainty slipper; they succeeded but were discovered and eventually blinded as a punishment. Their stratagems were found out when blood was seen to stain their stockings. As Perrault’s slipper was made of glass, their ghastly subterfuges would have been obvious at once. The Grimm brothers’ version is still known, though here muddled with Perrault’s:

The Office for Budget Responsibility’s forecasts do not fit the economic weather Salmond needs to make independence attractive and so, like the ugly sisters hacking off their toes to fit the glass slipper, the Scottish government publishes its own oil-price forecasts that meet the SNP’s economic vision.

One difficulty with giving Cinderella fur slippers is that they sound much too grandmotherly and everyday. A princess could not possibly wear anything so homely. Gold slippers certainly fit the bill, but the glass ones illustrate Cinderella’s delicate nature especially well. She would have had to be physically light and dainty to be able to wear them without shattering them.

And, after all, this is a fairy story.