It all started when I read a supplement that came with my daily newspaper, which was advertising an exhibition of new packaging techniques. One item concerned a packaging firm that was said to be bringing out a new type of bottle:

Even a bottle can be given a new spin: turned on its top by Spectra and suddenly it’s a “nottle”.

Nottle? That was new to me, though I’d previously heard of something that seemed rather similar, the tottle, a term that’s been around since the early 1990s:

The shaving gel concentrate comes in a silver plastic flask that Gillette calls a “tottle,” a combination tube and bottle.

The New York Times, 22 Sep. 1992. It seems from early examples that Gillette invented both the word and the container. 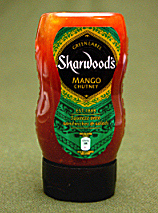 The tottle has become a common way to package almost any thick liquid, ranging from ketchup and other condiments to shampoo and shaving foam, though few people outside the industry know what it’s called. In a typical implementation it’s an upside-down flexible plastic bottle with a flat cap on which the bottle sits when not in use so that the product inside drains down to it. The cap hinges up to expose a nozzle. No more struggle to get the last of the liquid out and, in theory, no more catastrophes like this:

Shake and shake
The catsup bottle,
None will come,
And then a lot’ll.

Entitled Going to Extremes and often attributed to Ogden Nash, this is actually by Richard Willard Armour, from his Light Armour: Playful Poems On Practically Everything of 1954, though it’s quoted in many different versions. The Ogden Nash link is that it was inspired by Nash’s ode to a catsup bottle: “First a little / Then a lottle”. 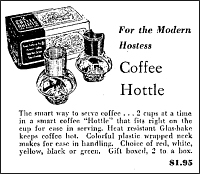 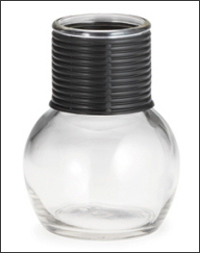 I searched around online for examples of nottle but could find none, although searches were bedevilled by all the references to Gussie Fink-Nottle and other people with similar surnames as well as all the misprints for “bottle”. An e-mail to the manufacturer produced no result. So I posted a note in the next issue of my newsletter, mentioning my abortive quest and wondering where the name had come from. Readers were inventive in coming up with ideas, the most common, and plausible, being nozzle + bottle.

More intriguingly, readers told me about two related terminological creations of marketing departments. Arnold Zwicky mentioned the hottle and referred me to dictionary.com, whose entry explains it to be “a thermal or glass carafe (often with black-banded neck and a lid) for holding a hot beverage.” Despite the subtle suggestion in the description, this contrivance wasn’t a type of vacuum flask but a thick-walled glass container. It seems to have been invented around 1950:

The Hottle (coined from “hot bottle”) holds 10 ounces, enough for two cups. Plastic insulation around the neck gives protection in handling when filled with hot liquids.

Not to be outdone, Jocelyn Dodd introduced me to the fottle, which is a folding bottle.

The latest Big Thing is called the Fottle, “Australia’s very first foldable bottle”. Fottles, which take up less than 20% of their former volume when folded, and use 60% less plastic than ordinary plastic bottles, are held to “make recycling easier” and take up less space at rubbish tips.

It didn’t catch on, and most references to a fottle online are to this old joke:

He says to the clerk, “I’d like to register my new invention. It’s a folding bottle.” “OK,” says the clerk. “What do you call it?” “A fottle.” “A fottle? That’s a stupid name. Can you think of something else?” “I can think about it. I’ve got something else though. It’s a folding carton.” “And what do you call that?” asks the clerk. “A farton.” “That’s rude. You can’t possibly call it that.” “In that case,” says the man, “You’re really going to hate the name of my folding bucket.”

Hottles, tottles and fottles. All clear enough, if unsatisfyingly repetitive. But what of the mysterious nottle that began my investigation of plastic containerage? Early the following week I finally got through on the telephone to the British firm that supposedly made them. A faintly embarrassed voice at the other end explained that it had been a misprint. It wasn’t a nottle, it was a tottle.