gallimaufry (noun)
1. a dish made up of leftovers
2. a miscellaneous jumble or medley 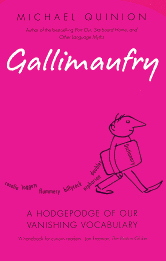 Words are always changing, and here best-selling language writer Michael Quinion has made his own selection of some of the most interesting examples of words and meanings that are vanishing from our vocabulary. Sometimes a word is lost when the thing it describes becomes obsolete: would you wear a billycock? Sometimes it survives in a figurative sense while the original meaning is lost: what was the first paraphernalia? Sometimes it simply gives way to a more popular alternative: who still goes to the picture house to watch the talkies? The story of these and many other words is brought vividly to life by the author, and illustrated by numerous historical references and quotations from writers down the years, including Samuel Pepys and Jane Austen, William Shakespeare and Patrick O’Brian.

An extract from the book

Two of the three classic styles of men’s headwear of the period were actually popularised by actresses. The fedora, later to be the classic topping of the Italian-American mobster, was named after the title and main character in a famous play by the French playwright Victorien Sardou, first performed in 1882 with Sarah Bernhardt as the hat-wearing Russian princess Fédora Romanov. The name of the trilby comes from a play adapted by the American Paul Potter from a book by George du Maurier. The latter had been an immense hit when it came out in 1894, as a writer in the New York Tribune in March 1895 wailed:

We are beset by a veritable epidemic of Trilby fads. Trilby bonnets and gowns and shoes, Trilby accents of speech and Trilby poses of person. Trilby tableaux, teas and dances. Trilby ice cream and Trilby sermons, Trilby clubs and reading classes and prize examinations, Trilby nomenclature for everybody and everything.

The play was brought over to London in November 1895 by the impresario Beerbohm Tree and was a huge success, ensuring that the hat worn by the bare-footed, chain-smoking, 20-year-old leading lady Dorothea Baird would become part of the British Trilby craze. Her picture, wearing that hat, appeared on postcards, in advertisements, on chocolate boxes, and in newspapers.

Women’s hats of the period also had names with literary associations. The Dolly Varden was large, with one side bent down, “abundantly trimmed with flowers” as the Oxford English Dictionary puts it. The name came from the coquettish character in Charles Dickens’s Barnaby Rudge. The fashion for it started about 1872, but it was not universally popular, it would seem, to judge from a snooty comment in The Athens Messenger (the one in Ohio) in May that year:

The maids of Athens, and the matrons too, do not take to Dolly Vardens
worth a cent.

Was ever any new costume more criticized than the new ‘Dolly Varden’.

Another a little later was the Merry Widow, an ornate and wide-brimmed hat whose style and name derived from the hat worn by Lily Elsie in the London premiere of Franz Lehar’s operetta in June 1907. The show made Ms Elsie a star and the focus of a craze, just as happened with Dorothea Baird a decade earlier. Her picture—wearing that hat, of course—appeared very widely in advertisements and picture postcards. This style was as common in the US as in Britain; Wu Tingfang wrote in confusion in his book America Through the Spectacles of an Oriental Diplomat in 1914 that

There you will see women wearing ‘Merry Widow’ hats who are not widows but spinsters, or married women whose husbands are very much alive, and the hats in many cases are as large as three feet in diameter.

He was right about their size. Some American examples became so large, in fact, that a postcard of the time featured a wearer staring sadly at a sign by a lift: