Q From Ellen Smithee: I was in India recently at the time shortly after Diwali when very many weddings take place. There were festive wedding processions everywhere. Each featured the groom riding on a white horse to collect his bride. It got me wondering about whether groom in this sense has anything to do with taking care of a horse. Or maybe that's what the groomsmen are supposed to do?

A Groom is common as a short form of bridegroom. How the word that we now use for a man who looks after horses came to be linked to one half of a marrying couple is one of the classic stories of popular misunderstandings — folk etymology — that cause language to evolve in unpredictable ways.

In Old English, a bridegroom was a brydguma, a compound of bryd, a bride or marriage, and guma, a man. Guma, which is related to Latin homo, was a poetic term for a man, which turns up in the epic poem Beowulf, as does another version of the same word, gome. 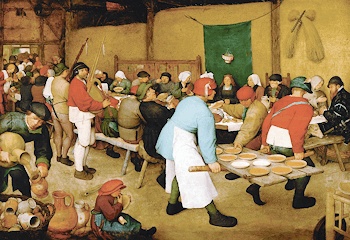 The Peasant Wedding, by Pieter Bruegel the Elder, 1567.

By the sixteenth century brydguma had become brydegome (though the spelling was variable). This was starting to look puzzling, because gome had become obsolete, and people didn’t connect it with that old word for a man. On the other hand, they did have groom.

In the twelfth century, this had been a term for a boy or lad, with something of the colloquial informality about it that kid still possesses, though it could only refer to a male child. Where it comes from is a mystery. Two centuries later it had grown up to mean an adult man, but it had also taken on the idea of a menial male, a serving-man or manservant. In the 1500s and 1600s it could also mean a shepherd, sometimes in the extended herd-groom. Our sense of a servant who attends specifically to horses developed in the seventeenth century. People casting about in the sixteenth century in an attempt to make sense of this mysterious old word gome seized upon groom as an alternative, despite its often inappropriate associations.

A very few grooms had by then gone up in the world. Servants in the English royal household had titles such as Groom of the Privy Chamber, Groom of the Stool and Groom-in-Waiting, all of which survived into the nineteenth century. They were notionally menial — for example, the Groom of the Stool was an intimate body servant, as you may guess from stool (from close-stool) meaning a commode — but in reality they were high-status posts because of the close association with the monarch they provided. However, I doubt whether the person in the street knew much about these unique positions.

Groomsman, by the way, appeared around 1700 as the male equivalent of the bridesmaid. Before then the attendant on the groom was a bridesman or brideman. This is odd to us today, but from ancient times, compounds that began with bride- had often been used for a wedding, not specifically a bride. As with gome, people in time lost that connection and changed bridesman to groomsman to make it clear which person was being attended.