Q From John Boaler: In one of C P Snow’s Strangers & Brothers series, Time of Hope, I came across a verb that I’d not seen before: “I did not burke the certain truths”. What did Snow mean by burke?

A It’s an intriguing verb.

It takes us back to the 1820s and that notorious pair, Burke and Hare. Medical schools were finding it difficult to get enough cadavers for the anatomic dissection essential to train students. The only official source was executed criminals but their numbers had been decreasing because fewer were being condemned to death, while the number of students needing corpses was increasing. One source was grave-robbing, carried out by low-life scavengers who were given the ironic name of resurrectionists.

William Burke and William Hare, two Irish immigrants to Edinburgh, started their grisly trade by selling the body of a recently deceased tenant of their boarding house to Dr Robert Knox, a local anatomist. Having learned that bodies could be profitable, they began to murder individuals, usually by getting them drunk and then smothering them, to leave no marks on the bodies that would reduce their value as specimens.

Burke was convicted of 16 murders and executed in January 1829; in a fitting end, his body was publicly dissected at the Edinburgh Medical College. Hare had turned King’s Evidence and had been given immunity from prosecution. The case caused a huge sensation, as did the imitative but much more widespread activities of a gang in the English capital which became known as the London Burkers. With the public outcry over grave-robbing, these led to the passing of the Anatomy Act 1832, which legitimised the donation of bodies for medical science. 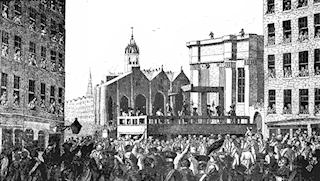 The execution of William Burke

The Times report on 2 February 1829 of his public hanging recorded of those attending that “every countenance wore the lively aspect of a gala-day” and that Burke’s name had already become an eponymic verb: the spectators shouted “Burke Hare too!” The events soon became a skipping rhyme for children:

Up the close and down the stair,
But and ben with Burke and Hare.
Burke’s the butcher, Hare’s the thief,
Knox, the boy who buys the beef.

But and ben variously means “backwards and forwards”, “to and fro” and “everywhere”. These days, it's more often the name of a traditional two-room cottage, an in and out, sometimes used as a holiday home.

By the time Charles Dickens was writing his first novel less than a decade later, the verb burke was known to everybody:

“Why, sir, bless your innocent eyebrows, that’s where the mysterious disappearance of a ’spectable tradesman took place four years ago.” “You don’t mean to say he was burked, Sam?” said Mr. Pickwick, looking hastily round.

The Pickwick Papers, by Charles Dickens, 1837.

By this time, too, the verb had become figurative. To burke is to suppress, hush up, or avoid discussing something. It’s from the idea of metaphorically smothering an issue. This is the sense in which Snow used it. Though it’s hardly common, it’s still around:

In the case of the BNP [the British National Party], both Government and Opposition need to be compelled to confront the issue they have for so long burked; for it is the mishandling of this which has allowed the BNP to raise its ugly head.

By the way, burke has no connection with the British slang term berk for a stupid person. That’s rhyming slang, known from the 1920s if not earlier, short for Berkeley (or Berkshire) Hunt, even though in British English the first parts of both are pronounced “bark”.