Q From Jenny Beadnell: Could you give me any information on the origins of the word cardigan?

A No problem. It’s an eponym, a thing named after a person. The person in this case was James Thomas Brudenell, seventh earl of Cardigan, a notable nineteenth-century figure. 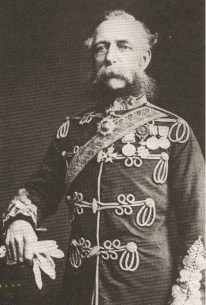 He was ultra-conservative, intolerant, made enemies easily to the extent of provoking duels, and a seducer of young women. That made him notorious. But his continuing fame rests on his actions as a major general during the Crimean War. In October 1854, at the age of 57, he led the disastrous charge of the Light Brigade up the valley towards the Russian guns.

The weather was appalling in the Crimea, bitterly cold and damp. Some officers wore a long-sleeved knitted worsted military jacket as a way to keep warm. This was the original cardigan, though it wasn’t much like modern examples. It soon took on Lord Cardigan’s name, though why is obscure. Though he was a stickler for sartorial elegance among his officers, he didn’t invent the item (despite some writers claiming he did). It would seem his name became attached to it because he was the best-known figure of the War, who was fêted on his return to Britain and lived extravagantly.

The earliest references, from 1857, are to cardigan jackets and later to cardigan waistcoats. His lordship’s name started to be used by itself about a decade later:

He wore, I remember very well, a knitted sort of waistcoat, or Jersey — an article called, in the cheap linen-drapers’ shops, a Cardigan. I recollect thinking that this was the first garment of the kind I had ever seen.

Two other items of clothing have links with the Crimean war. To protect them against the bitter cold, some soldiers persuaded wives or relatives at home to knit them head coverings that left only small holes for eyes and mouth. These became known as balaclavas, after the Crimean port that was the British operational base. Another item whose name appeared at the time was the raglan, a type of overcoat named after Lord Raglan, the British general in the Crimea. The garment was unusual in that the sleeves continued in one piece up to the neck, producing a larger, looser armhole that suited the one-armed general, hence our term raglan sleeve.