Q From Adam Sampson: My grandmother, who’s from North Kent, surprised us by using the verb chi-ike recently, meaning “banter”. We’d never heard of this before. It’s in the Oxford English Dictionary, but with no etymology; are you able to shed any light on this?

A This takes me back. Having been brought up in London and being — I guess — roughly contemporary with your grandmother, I’m familiar with chi-ike. That you don’t recognise it is further evidence that it has now vanished from the living language.

Banter is a good way to explain it: friendly mocking exchanges between men, say on building sites, the factory floor or across the street. However, in less friendly situations it can also be heckling and taunts. The first part, by the way, rhymes with sky and the second with like (phonetically ).

I can’t give you a firm answer about its etymology — the experts are baffled and it remains a puzzling mystery. There are one or two hints, but I need first to tell you more about its history. 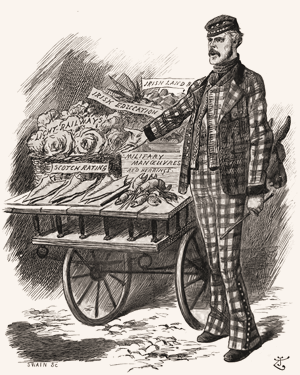 .
Punch magazine was having fun in July 1896 with this image of Arthur Balfour, then First Lord of the Treasury, as a costermonger hawking unpopular policies.

It arose among London costermongers in the early to middle nineteenth century. The date is uncertain because until recently we encountered it first in the UK in John Camden Hotten’s Dictionary of Slang of 1859: “Chi-ike, a hurrah, a good word, or hearty praise”, by which date it had probably been around for decades. The 1870 edition adds that chi-ike was “a term used by the costermongers, who assist the sale of each other’s goods by a little friendly, although noisy, commendation.” It’s also often said to have been a hearty greeting.

The British slang lexicographer Jonathon Green has found it somewhat earlier in a ballad published in a collection of 1835 entitled The Cove, a Regular Rum Collection of Spreeish Songs. The first line is rather obscure but seems to be suggesting that a man’s girfriend (his mot) has heard a cry of greeting from another man and gone off with him:

If chance his mot male chyhoik hear,
And sneaks at once into her nest.

Cock-Eyed Sukey, reproduced in the 2011 four-volume collection Bawdy Songbooks of the Romantic Period by Patrick Spedding and Paul Watt (a snip at £350).

Some early appearances suggest the quality of friendliness in the exchanges could be lacking. It might imply jeering, mocking or making fun of somebody. This is the sense that was taken to Australia, where it appears in print first in a wildly variant spelling due to oral transmission of an unfamiliar term in accents unfamiliar to an English visitor:

The “skyhacking”, to which the police were subject ... was brought on principally by their own individual overbearing conduct ... bullying and swearing at every one.

What I Heard, Saw and Did at the Australian Gold Fields, by C Rudston Read, 1853.

A ditty in the London humorous magazine Punch in 1887 told of a lad who liked to visit the seaside because he could go on the pier to observe seasick passengers arrive back from boat trips: “And it is sech a lark to chi-ike them, the best bit o’ fun of the day.”

By 1871 the term had entered popular culture as one of the names of the Chinese policemen in the pantomime Aladdin and the Wonderful Lamp. One instance was at the Theatre Royal, Liverpool, in which the part was played by Che Mah, the “original imperial Chinese dwarf”, claimed to be thirty inches in height and so “the smallest man in the world”.

In Australia it has been spelled chiak and chyack and took on an additional sense of boisterous and noisy behaviour by young men, which has often been described as shyacking about. It had reached New Zealand by the 1880s in the similar spellings of shiack and shyack. I’m told that it has now fallen out of daily use in these countries, too, though known to older people. Oddly, the various Oxford dictionaries prefer to spell it chi-hike, which has never been common. Did Oxford’s lexicographers of the 1930s, when the entry was written, have special information or did someone assume Cockneys were dropping their hs and put one in?

It is sometimes suggested that it’s from English dialect, though nobody has pointed to a specific word and there’s nothing relevant in the various glossaries. A writer to Notes and Queries in 1898 wondered if chi-ike could be an attempt to reproduce the Cockney pronunciation of cheek, to address a person saucily or cheekily. We might speculate instead that it evolved from aye-aye!, a cry of greeting or acknowledgement. A few early usages hint at a link with the Jews of London’s East End, some of whom were costermongers. This is probably just a guess, based on the second element ike, which at one time was a derogatory name for a Jew (a form of the personal name Isaac, also as ikey, or as ikeymo, Isaac and Moses; the American variant form kike wasn’t then known).