Q From Val Bellamy, Sydney: I came across copper-fastened in an article in the online publication Spiked: “In many ways, the Diana phenomenon merely copper-fastened political and social trends that had been apparent for a decade before she died.” This was not a word I had seen before. Is it undergoing a revival or have I just missed it?

A I’d not come across it before you wrote, but in origin it turns out to be a very close partner of a much more common figurative expression, copper-bottomed, meaning “thoroughly sound, genuine, authentic, trustworthy, reliable or certain not to fail”.

In literal senses, both date back to the days of wooden-hulled sailing ships. These were often attacked by the teredo, a type of mollusc, once incorrectly called the shipworm because it was superficially wormlike in shape. In warm waters, the teredo bored into ships’ timbers, causing great damage, as it did also to harbour installations:

[Ship-worms] are not contented with a superficial station, but seek a secure resting place within the log; and, when once they take up their residence, soon riddle the substances through and through, reducing the wood to a mere shell. Any wood-work constantly submerged is subject to their attacks, and it is astonishing with what rapidity the work of destruction goes on. Piles of solid pine-timber, of large size, have been proved to be perfectly destroyed within five years. 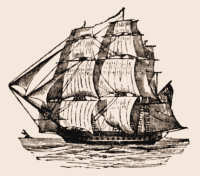 The solution was to encase the whole of the hull of a ship below the waterline in sheets of copper, a technique which the Gentleman’s Magazine reported in 1761 was first applied in that year to a ship of the Royal Navy, the frigate Alarm (lead had previously been used, a technique that dates from classical Greece). By 1807, the date of the Oxford English Dictionary’s first example, copper-bottomed had already become a figurative expression. It was soon realised that one had to use copper nails and bolts to fix the sheets to the hull, not iron ones, or electrochemical action in seawater would soon corrode away the iron (this happened to the Alarm during its first voyage to Jamaica). To be both copper-bottomed and copper-fastened was a mark of a properly equipped vessel:

She is copper-fastened and copper-bottomed, and a remarkable fine ship.

Unlike copper-bottomed, copper-fasten (with its adjective, copper-fastened) has had to wait until modern times to become a metaphor. The expression is poorly recorded both in print and in dictionaries. However, it does appear in the Dictionary of Newfoundland English of 1980, which has examples back into the 1960s and says it means “to nail down or secure; to reach a clear and firm understanding or agreement without loop-holes or ambiguity”, a notably different meaning to that of its relative. The earliest examples I can find are from Ireland in the late 1980s, though the Newfoundland connection makes it certain that it was then far from new:

It was yet another irony of Anglo-Irish relations that de Valera’s greatest negotiating triumph should have copper-fastened partition.

His visit had copper-fastened the twin-track initiative launched on the eve of his arrival by John Bruton and John Major.

The Irish Voice, New York, 12 December 1995. The visit was that of Bill Clinton to Ireland.

It appears most often in a political context, especially in connection with the Troubles, and continues to be found mainly in Irish sources, north and south. Though it does from time to time turn up in newspapers in the rest of the British Isles, it’s almost always in connection with items about Irish affairs that we may presume are by Irish writers.