Q From Chester Graham: I came across the word corium in a strange online article about nuclear reactor disasters. I looked it up in my favourite dictionaries, where it means one of the layers of skin. Has the writer made a serious mistake?

A We must forgive your favourite dictionaries for not including corium. Though it’s a real word with a distinct meaning, it’s part of the specialist jargon of nuclear safety experts and almost totally unknown to the wider world.

It seems to have been invented by the team investigating the Three Mile Island nuclear accident in 1979. They used it to describe the mass of lava-like molten fuel, fission products, control rods, structural materials and concrete that flowed into the base of the reactor after it had overheated. 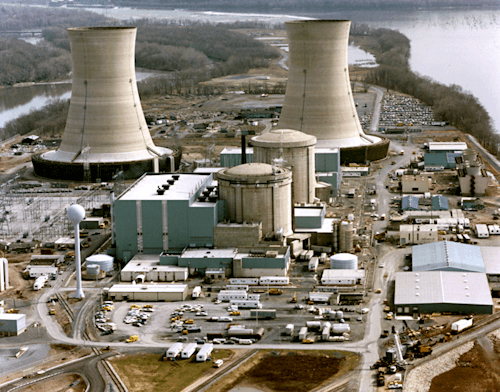 The Three Mile Island nuclear generating station before the 1979 accident.

I’ve not been able to track down the origin in more detail but it was almost certainly created as a compound of core with the suffix -ium that usually marks a chemical element. I’d guess it was a black joke, created to relieve the awfulness of the situation confronting the investigators, who needed a term to describe the material generated by the disaster, which hadn’t been seen before. However, it had been a worry for years that a disaster of the sort might happen, and a decade earlier China syndrome had appeared for a nuclear accident so bad that the core fancifully melted its way right through the earth.

The nuclear accidents at Chernobyl and Fukushima have also produced corium and the term has been used in the technical reports of both.

Incidentally, your dictionaries’ sense of corium, though not so rare as the nuclear one, is also unfamiliar to most people. These days, it’s more usually called the dermis, the “true skin” which lies beneath the surface layer that, logically enough, is the epidermis (Greek epi, upon or near). Corium is Latin for skin, hide or leather. It appears, somewhat disguised, in excoriate, literally to remove the skin but usually figuratively to criticise somebody so harshly that it feels like being skinned. Even more obscurely, it’s the source of cuirass, a piece of armour originally made from leather, and yet more so of malicorium, an old word for the rind of the pomegranate, which strictly speaking ought to mean an apple skin, as it’s from Latin malus, apple, though in antiquity any globular fruit could be called an apple.