Q From From Terhi Riekkola: I haven't been able to find a satisfactory etymology for dope when it’s used in the sense of drugs, either recreational or performance-enhancing. I’ve encountered what was given as the original sense of dope, meaning some kind of liquid preparation that helped you with certain tasks, like lubricants and so on. But I found no satisfactory links between this “practical sticky stuff” sense and the drug-related meaning of the word. I was wondering if you could help me?

A Dope has several senses that aren’t obviously linked, though investigation shows there are clear connections. Historically, the word has had a wide variety of slangy associations. They include not only the lubricants and drugs you mention, but also information, a stupid person, and a varnish for cloth aircraft parts. Regionally in the US it has also meant Coca-Cola (because in its early years the drink was sold as a medicinal restorative and included some cocaine), the sprinkles on ice cream and various additives. In modern slang it can refer to something very good.

Dictionaries universally say that dope is from the old Dutch doop, a sauce or dip, from the verb doopen, to dip or mix.

The Dutch word appeared briefly in American writing near the beginning of the nineteenth century, in a couple of pieces by Washington Irving in which he used it in the sense of gravy. In the issue of his satirical magazine Salmagundi of 16 May 1807 he included a humorous piece, The Stranger in Pennsylvania, which state he asserts was founded by one Philo Dripping-pan:

Philo Dripping-pan was remarkable for his predilection to eating, and his love of what the learned Dutch call doup. Our erudite author likewise observes that the citizens are to this day noted for their love of “a sop in the pan,” and their portly appearance ... he ill-naturedly enough attributes to their eating pickles, and drinking vinegar.

(The Pennsylvania Dutch as a group were early immigrants from Germany, though Dutch speakers also settled in the state. It was common in American English up to and beyond Irving’s time to use Dutch as an informal term for Germans, which is where our confusing name for the group comes from, not from a mishearing of Deutsch, the German word for German, or Deitsch, which is what the Pennsylvania Dutch call their language. A few readers recall elderly relatives using Dutch or Dutchman in this sense, suggesting a long vernacular survival outside mainstream English.)

Somehow — we don’t know the details, but it was presumably at least in part the result of Irving’s fame as a writer — doup evolved into the slang dope. It appeared first in print as an ill-specified term for any thick liquid or glop. The earliest example that I’ve found — actually the derived verb — was in a newspaper article that listed deceptions practiced by sheep farmers:

Dope the sheep:— that is, put on oil and coloring to make a sheep look like the required breed; that is, paint the sheep as a common horse was once painted and sold for one of a superior race.

Sandusky Daily Commercial Register (Sandusky, Ohio), 17 Jun. 1856. You may feel that buyers of such sheep were more than a little unobservant.

In later years, dope was recorded for all sorts of stuff — among others a slop of mud and water to preserve the roots of trees awaiting planting, the chemical on the heads of matches, harness blacking, train axle grease, the material that nitroglycerine is absorbed in to make dynamite, sugar added to cans of sweetcorn and a lubricant for snowshoes:

There is hardly a man, woman, or child on this side of the continent who has not heard of “Snowshoe Thompson”, yet very few persons really know anything about him or his exploits. His were the first Norwegian snowshoes ever seen in the mountains, and at that time nothing was known of the mysterious “dope” — a preparation of pitch, which, being applied to the bottom of the shoes, enables the wearer to glide over snow softened by the rays of the sun. ... Without “dope” the soft snow stuck to, and so clogged his shoes that it was impossible for him to travel in it.

Albert Lea Enterprise (Albert Lea, Minnesota), 30 Mar. 1876. Norwegian snowshoes were actually skis, given that name to distinguish them from the racquet-shaped snowshoes used by native Americans. The word ski wasn’t then known.

It’s also recorded early on in the sense of a drug, either for humans or horses:

I learned something of his giving dope to his horses about the time he moved from Garrettsville to Chagrin Falls. ... I learned that he was giving his horse arsenic and laudanum.

He persistently refuses to give the signs by which admittance may be had to the [opium] den, but he says that it is so jealously guarded that four doors have to be passed through before the smoking-room is reached, where a “dope” for ten cents, requiring about twenty minutes to smoke, is obtained, and on the bare floor of which the smokers lie extended during their torpor. 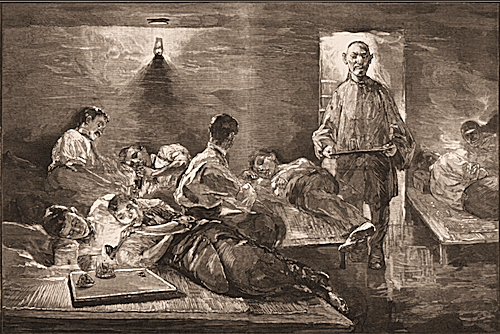 This gave rise in the early 1880s to the term dope-fiend for an habitual user. Later, dope broadened to refer to all sorts of recreational narcotics, becoming widely known by the early twentieth century.

In the other branch of the drug sense, the term became specifically associated with drugging racehorses, either to improve their performance or degrade it:

The mare was two lengths ahead the first thirty yards, but suddenly let up, and was badly beaten. There is no doubt but that foul play was the cause of her losing, the mare having been “doped”.

Drugs of every name and description are used to “dope” horses so that they may win stakes. The poor animals are stuffed with all sorts of stimulants from sherry to strychnine. ... Such drugs as Fowler’s solution of arsenic, Spanish fly, cocaine, chloral, valerian, and belladonna, were employed.

Dope in the sense of information, particularly information that isn’t widely known or easily obtained, came directly from this practice. A whisper from the stables or some confederate telling a gambler which horses were being drugged was potentially worth a lot of money, so dope came to mean knowledge that drugs had been employed. This led to its being used for information about racing in general and later broadened still further. A publication giving punters background information about horses at a track became humorously or sarcastically known as a dope book, also later a dope sheet; both were recorded in the 1890s and similarly these generalised later to refer to other topics. The phrases inside dope, real dope, true dope and straight dope — asserting the undisputed truth — were appearing in print by the early years of the new century:

Referee Bean gave out the following figures and the fight fans who want the straight dope will probably not miss it far by accepting them.

The sense that’s least clear in its origins is that of a stupid person. It was recorded a couple of times in the Cumberland dialect of northern England in the middle of the nineteenth century in the sense of a simpleton and in the US from the early twentieth century. We have to conclude that the two arose independently, the Cumberland one from some unknown source and the American one from the idea of a person under the influence of a narcotic. The adjective dopey is also American and is recorded earlier than the corresponding noun.

She is very thin now, and has the peculiar clear pallor that marks the excessive opium smoker. She looked “dopey,” too, even then. “Dopey,” by the way, is the Chinese quarter‘s most brilliant contribution to American slang. One hears it from the lips of people who have no idea that dope means opium.