Q From Dick Bentley: World Wide Words has many references to the Goon Show, the 1950s surreal British comedy radio programme, but none to goon itself. It’s a mysterious word in some ways: it seems to have two separate meanings; “idiot” and “hired thug”, which represent separate origins, perhaps? What is its true origin?

A Goon stepped shyly on to the public stage in the issue of Harper’s Magazine for December 1921. A whimsical article by Frederick Allen had the title The Goon and His Style: “A goon is a person with a heavy touch as distinguished from a jigger, who has a light touch. While jiggers look on life with a genial eye, goons take a more stolid and literal view.” He said the word was a family saying, but he might equally have made it up. After this, the word vanishes again for a decade.

The beginning of its popularity dates only from January 1934, when the cartoonist Elzie Segar got around to giving a new character a name: Alice the Goon. She had appeared in his Thimble Theatre comic strip on 10 December 1933, joining Popeye, Olive Oyl and others. Alice was a fearsome character, immensely tall with shaggy arms and legs and a long nose like a proboscis monkey. She was at first a guard employed by Popeye’s antagonist, the pirate and sorcerer called Sea Hag. Alice was powerful but dim-witted and goon came into the language first in the sense of a stupid person. It is said college students used it first.

Top: the first-ever appearance of Alice the Goon in Thimble Theatre on 10 December 1933; Below: Part of a strip from 11 March 1934, in which Alice is murderous and J Wellington Wimpy is unhappy. 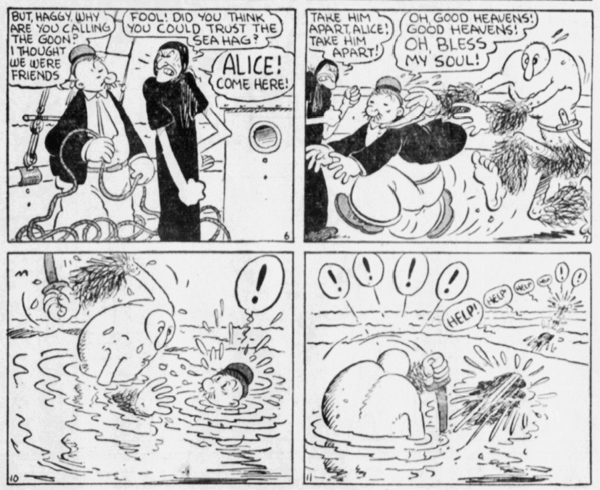 In the later 1930s, goon began to be used for a ruffian or violent thug, particularly one employed by a labour union to frighten recalcitrant members and anybody who opposed the union. It appeared most often in the phrase goon squad:

Beck uses the mailed-fist and makes no bones about it. His staff includes a gang of imported strongarm men, known locally as the “goon squad.”

Goon in this sense was at first local slang; in early 1938 it achieved national notice through the jailing of union organisers from the region. It was most likely taken from Alice the Goon, who — at least in the early days before Segar softened her — was a subhuman brute. It might have come from the same source as Segar got it, whatever that was, but that seems less likely.

We may reasonably assume that the slang term for German guards in prisoner-of-war camps followed from this sense of an unintelligent thug. However, Spike Milligan says that he took the name of the Goon Show from the cartoon character and not from prison guards; he was using it in army training camp at Bexhill in Sussex in 1941 before that sense had become known or perhaps even coined.

This leaves us with the final part of your question: where did goon come from? We can’t be absolutely certain, but gooney has a long history in English, also as gony, gonnie, gawney and other forms, meaning a simpleton or fool. It may be from gone, implying that the person so described has lost their wits. Gooney is recorded in New England from the 1830s, though it’s probably older in North America. Sailors of the nineteenth century called various albatross species gooney birds (which was adopted during the Second World War for the Douglas C-47 Skytrain aircraft, which Brits know as the Dakota). It seems most plausible that Segar took goon from gooney.