Not so green as you’re cabbage-looking

Q From Laurence Horn, USA: On one of the Inspector Lewis episodes in the BBC/PBS Masterpiece Mystery series, Lewis tells Det. Sgt. Hathaway (who has just acknowledged copying a key notebook before returning it), “You’re not so green as you’re cabbage looking”. A new one on me (I had to rewind to make sure that’s what he said), but upon consulting Google I’ve learned that it’s “an old Yorkshire saying” that seems not to have made it across the pond. I’m sure you can trace its genealogy for us.

A This is a delightful folk saying. Like so many it’s sufficiently opaque to make the casual reader or viewer stop and blink.

The expression is usually a way for a person to declare he isn’t as easily fooled as another person might think:

As my Aberdonian grandmothers used to say when confronted with any childish attempt at deception: “We are not as green as we are cabbage-looking.”

But in this case Lewis is saying that Hathaway has surprised him by his initiative, that he might seem to be untrained or unworldly but that he has actually been rather clever. It’s more complimentary than it sounds. 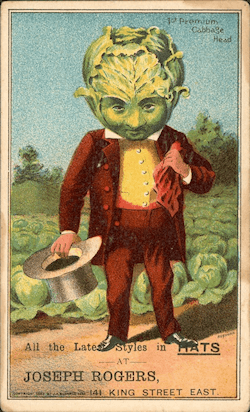 The hatter who produced this humorous advertising card in 1887 certainly wasn’t green!

Green here means naive or foolish; cabbage-looking is from an old comparison of the head to a cabbage, it being roughly the same size and shape. Cabbage and cabbage-head have long been slang terms for a dull-witted, stupid or naive person. And, of course, they’re green.

A splendid example is in a report of a case at Southwark County Court in London more than a century ago, recorded in authentic voices by the court shorthand reporter. It concerned a greengrocer who was being sued for lost wages by a man he had sacked for wanting to take an evening off:

Defendant: He said “Tip me five and a kick I’ve earned and we’ll cry quits. I can’t stop ter-night, as I’ve got to meet the donah.” (Roars of laughter.) His Honour: Is that true? Plaintiff: No. When I’m agoin’ he says, “You can’t go now. You must clear the spuds orf ther front board.” His Honour: And what did you say? Plaintiff: I said I knew ’ow many beans made 5 — (laughter) — and if I wor cabbage-looking I woren’t green. (Roars of laughter).

Westminster Gazette, 3 Nov. 1898. A donah was a wife or girlfriend, via Polari from Italian donna, a woman; a kick was sixpence, an imperfect rhyme between kick and six; the front board was presumably the display area in front of the shop. The man won his case and got his wages.

This is the first example in the recently revised entry for the phrase in the Oxford English Dictionary. The word play and the laughter show that the speaker’s audience knew the expression well. How long it had been in the spoken language is impossible to say. But there are hints, especially this earlier example from Australia:

The moral which the splitter extracted from the experience was to the effect that a man is not necessarily green because he is cabbage looking.

A phrase so curious could hardly have been invented twice, so we must presume it was taken to Australia by emigrants at some earlier date still. I’m told that it survives there still, mostly among older people.

The expresssion is still popular in Yorkshire and it’s often assumed it began there because it fits the pattern of other allusive local sayings like “well, I’ll go to the foot of our stairs” (meaning the speaker is astonished) or “he’s all mouth and trousers” (a put-down to a pushy man). There’s no firm evidence for this, though.

It’s unknown in the US now but it appeared in a Pennsylvania newspaper in 1907 and a Texas one in 1910. We may guess that it was transplanted from its native soil by immigrants but failed to thrive. It’s known from Canada in 1919 and Ireland in 1922 — James Joyce used it in Ulysses that year — though it was far from new in that country, so much so that it’s been suggested that it might be an English version of a Gaelic saying.