Q From Marcus Patton: Do you know the origin of the phrase honky-tonk? There was a firm called Ernest Tonk that made pianos in New York in the late nineteenth century, and their heavy and robust pianos (there are still a few of them around) will have found their way into many a dive where they may well have given rise to the term — but do you know any different? 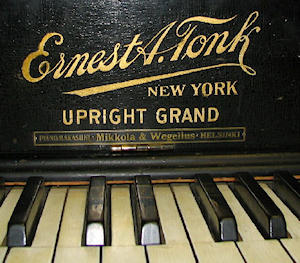 The term honky-tonk is frequently linked to the firm of William Tonk & Bros of Chicago and New York, founded in 1880, whose sturdy upright pianos began to be manufactured in 1889 under the name of Ernest A Tonk (from William’s middle forenames, it would seem from your reading of William Tonk’s autobiography; William had a nephew named Ernest A Tonk but he was born only in 1889 and he was never associated with the business; he became a well-known painter). The firm may have assembled pianos earlier, using a German action.

It’s equally often stated that the link is with Tin Pan Alley in New York, which is said to have employed Mr Tonk’s pianos in the 1890s. This supposed link is used to explain how honky-tonk became a term for a type of ragtime piano music.

However — and this is where yet again I shoot down a common belief — honky-tonk is also first recorded in 1889, though it was clearly already sufficiently well known not to need explaining. It meant a type of low entertainment. Though a piano was often used to accompany performances, there hadn’t been enough time for tonk to have become associated with pianos and then shift its meaning to refer to the whole entertainment. The other objection is that its first appearances are a long way west:

A petition to the council is being circulated for signatures, asking that the Honky Tonk theater on Main Street be reopened.

Myself and him set and talked awhile and he got up and said he wanted to go to the honk-a-tonk (variety show).

“Variety show” was a euphemism employed by their proprietors, who hoped, unsuccessfully, to present them as reputable establishments. Honky-tonks in the Old West were a mixture of bawdy music hall, casino, saloon, cheap dance hall and brothel, frequently linked to lawlessness and violence. By the time they began to be given that name, some of the crude energy of the frontier had faded from them, although they were still low-class dives catering for working-class men, with a reputation for fleecing their customers. This is why honky-tonk later came to mean something disreputable and squalid. The Daily Gazette quotation refers to a battle between owners and the Fort Worth city council, which a year earlier had closed a couple of them on Main Street as part of a long-running and largely unsuccessful attempt to crack down on bars that also housed less savoury activities.

From some distance in both time and space, it was possible to look back on them with misplaced nostalgia. An article that originated in New York remarked sadly, “The once popular institution is dying off.” It described a sentimental vein in their performances that appealed to their rootless and lonely male customers:

Ordinarily, the honkatonk opens about nine o’clock, and continues in full blast until one, or thereabouts, as long as its patrons will patronize the bar. ... The programme is made up largely of specialties. Whatever the feeling of a long-suffering public, the honkatonk vocalists never will permit “Sweet Rosie O’Grady” and “Just One Girl” to perish from the earth, and coon songs are sung as May Irwin never did and never will sing them. Always at least one drama is presented, the entire company, vocalists, dancers and all, participating.

Evening Gazette (Reno, Nevada), 3 Feb. 1900. This is a syndicated reprint of an article in the New York Sun of unknown date. May Irwin, by the way, was a vaudeville actress and singer of the period. Thanks to researcher Barry Popik for finding this.

As I have now refuted popular understanding of the origin of the term, you will be awaiting my definitive alternative. Alas, there isn’t one. Nobody has the slightest idea where the word comes from, though the scholarly opinion is that it must surely be another of those rhyming duplications, most probably based on the raucous nature of the establishments.

Other false etymologies include the suggestion that honky refers to the derogatory black slang term for a white person, though this didn’t appear in print until the 1960s. Some early references, such as the definition in the Century Dictionary of the 1890s, described honky-tonks as “low groggeries” patronised by the blacks of the southern United States, which might suggest a link, but as the examples above show, this is a false view of their geographical spread, function and clientele.

We may also disregard the following story, though it is coated with the patina of ages and has often been retold:

Every child of the range can tell what honkatonk means and where it came from. Away, away back in the very early days, so the story goes, a party of cow punchers rode out from camp at sundown in search of recreation after a day of toil. They headed for a place of amusement, but lost the trail. From far out in the distance there finally came to their ears a “honk-a-tonk-a-tonk-a-tonk-a,” which they mistook for the bass viol. They turned toward the sound, to find alas! a flock of wild geese. So honkatonk was named.