Q From Elos Gallo; a related question came from Robert Levy: It has been my understanding that Ivy League referred to a sporting competition held long ago between four colleges, so ivy was formed by saying the Roman numerals IV. I’m now told that ivy is that actually growing on the walls of these ancient universities. I took this ivy explanation as being folk etymology. Would you know which is correct? I don’t trust Wikipedia on this one.

A Although it’s stated as fact elsewhere, Wikipedia to its credit doesn’t accept a derivation from the Roman IV for four. The Morris Dictionary of Word and Phrase Origins gives more details of this supposed origin than do other works, calling it “a plausible theory”. It quotes a letter from a Columbia graduate who says it refers to a nineteenth-century athletic competition between Harvard, Yale, Columbia and Princeton. Wikipedia notes there was a meeting in 1873 between four colleges, though not those four, to try to fix the rules of college football, but only three attended and no formal link was established. 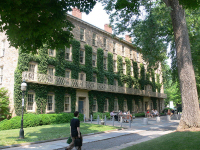 It is true that Ivy League was originally a sporting term. It was the name of a league of football teams from eight colleges — Brown, Columbia, Princeton, Yale Cornell, Dartmouth, Harvard, University of Pennsylvania — who are reported to be discussing its formation, under that name, in a syndicated article that I found in the San Antonio Light for 7 February 1935. Teams from the Military Academy at West Point and the Naval Academy joined later but dropped out again in 1940. Ever since then, the league has been made up of the original eight college teams, a group that became official in 1954. You can attach the numbers ten or eight to the group, but not four.

Wikipedia repeats an origin that appears in numerous other works. It argues that the original form was ivy college, first used by the sports writer Stanley Woodward in the New York Herald Tribune in October 1933. Wikipedia says the term was borrowed by another sports writer, Caswell Adams, who changed it to ivy league. Charles Earle Funk, in Heavens To Betsy!, reprints a letter from Adams in which he recalls, a little vaguely, that he coined the phrase “in the mid-thirties”, but says Woodward borrowed it, crediting him. So far I haven’t found an example of Ivy League earlier than the one from February 1935 and nobody has turned up anything from the New York Herald Tribune between Woodward’s 1933 ivy colleges quotation and the one from the San Antonio Light in 1935, so Adams’ claim to its invention remains unproved.

These days the sporting associations are only part of the concept that we understand by Ivy League. For many, it has become a disparaging term for long-established eastern US universities that exhibit, as Wikipedia says, “academic excellence, selectivity in admissions, and a reputation for social elitism”.

Their great age is integral to the term, since there’s no doubt that it is the ivy on the college walls that led Stanley Woodward to create the term ivy college in 1933. But he was surely borrowing an association that had long been made between ivy and ancient institutions of learning. It appeared near the start of the twentieth century in the phrase ivy-covered halls; the first example that I can find is in Red and Black by Grace Smith Richmond, dated 1919: “He had his ticket and a sleeper reservation — it was fifteen hours’ journey back to the old ivy-covered halls which had grown dear in his memory.” Tom Lehrer had fun with the expression in his song Bright College Days of 1959:

Bright college days, oh, carefree days that fly,
To thee we sing with our glasses raised on high.
Let’s drink a toast as each of us recalls
Ivy-covered professors in ivy-covered halls.