Q From Patrick Neylan: I was just about to chide someone for believing Jeep to be an acronym of ‘Just Enough Essential Parts’ and was about to point out, with just a trace of smug superiority, that Jeep is, of course, a corruption of the initials GP, short for General Purpose (Vehicle). Then I thought, ‘Hang on, how do I know that?’ It seems there’s a lot of dispute, with some very credible arguments against General Purpose. You don’t seem to have tackled this one. Might I suggest an investigation?

A You’re right to be cautious. An etymologist who has recently investigated the matter concludes:

The word was coined in the full light of history, we have eyewitness reports (conflicting as such reports always are) of the car’s production, and we still have doubts about the origin of its name.

An Analytic Dictionary of English Etymology, by Anatoly Liberman, 2008. Puzzled enquiries about the origin of the name, for example, began to appear in various publications as early as May 1944.

Professor Liberman devotes several thousand words to his discussion of the various theories but comes to no very clear conclusion. With that facing me, perhaps the best thing to do would be to walk away. But it’s worth giving at least the bare bones of the controversy. 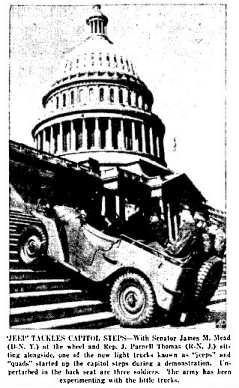 The jeep was a quarter-ton all-terrain reconnaissance vehicle (a half-ton version also existed) that was manufactured by several firms. It officially came into service in the US Army in early 1941. Jeep is first recorded for it in August the previous year and seems almost from the beginning to have been its universal name among servicemen. As a demonstration of its powers, one was driven up the steps of the Capitol building on 20 February 1941; the Wisconsin Rapids Daily Tribune remarked, under a photograph of the event (right), that the new light trucks were known as jeeps or quads.

Dictionaries do commonly say that it’s from the initials GP, general purpose. This origin is disputed because only one maker, Ford, used those initials and they only meant something within its factory (G for government contract and P as a code for a vehicle with an eighty-inch wheelbase). GP never meant general purpose, which would have been a misnomer because the vehicle was designed for a specific role. A more fanciful origin is that it’s a reduced form of jeepers creepers (a euphemism for Jesus Christ), supposedly uttered by Major General George Lynch when he took his first ride in a prototype vehicle in 1939. Others point to the army slang sense of jeep for a recruit or something insignificant or unproven; however, the jeep was anything but that, with everyone marvelling at its abilities.

This leads me to an origin that’s now widely accepted as a major influence, if not the sole origin — Elzie Segar’s comic strip Thimble Theater. It’s best known for Popeye the Sailor and Olive Oyl. In March 1936 a new character arrived to great ballyhoo (adverts were placed in newspapers that took the strip to announce his impending arrival: “You’ll laugh! You’ll howl! Everyday! Watch for Popeye and the Jeep”.)

This was Eugene the Jeep, a rodent-like character the size of a small dog whose only word was jeep! (most likely a variation on cheep), who lived on orchids and had supernatural powers that let it tell the future (and also disappear into the fourth dimension at need). Eugene the Jeep soon became widely known, with many references to him appearing in newspapers throughout the US.

Eugene the Jeep meets Olive Oyl; from the Newark Advertiser of Saturday 21 March 1936.

It is likely that the letters GP on the Ford models suggested Jeep to servicemen. It is also probable that the term was applied as an affectionate epithet because, like the wondrous animal from Thimble Theater, the vehicle could “go anywhere”.