Q From Steve Campbell: My dear old mother would occasionally use the expression Who do you think I am, Joe Soap? We migrated to Australia from the Old Dart in 1951 and I’ve never heard it used by Australians. What is its origin and is it still in use in the UK?

A It remains moderately common in Britain but its meaning has shifted since your mother learned it. She would have had in mind a stupid or naive person, one who could be easily put upon or deceived. These days it refers to a typical individual, the archetypal person in the street.

The full judgement will be published in a week or two and the ordinary Joe Soap will take hours to read it and understand. 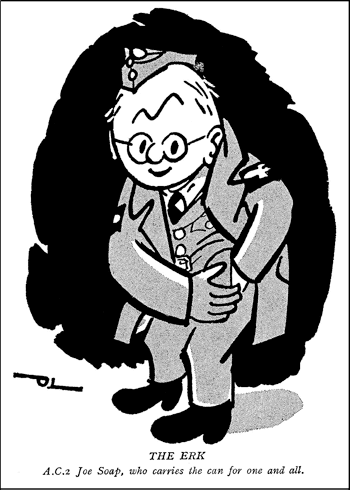 An early wartime use, in an illustration by David Langdon in Cyril Jackson’s It’s a Piece of Cake — RAF Slang Made Easy of 1943. The text reads “A.C.2 Joe Soap, who carries the can for one and all.”

This sense is now known outside the UK, especially in North America.

Your mother’s sense is usually regarded as services slang from the Second World War, most often associated with the Royal Air Force:

Joe Soap was the legendary airman who carried the original can. He became a synonym for anyone who had the misfortune to be assigned an unwelcome duty in the presence of his fellows, or to be temporarily misemployed in a status lower than his own. “I’m Joe Soap,” he would say lugubriously, and I’m carrying the something can.”

Royal Air Force Quarterly, 1944. “Something” may be read as a polite substitute for a more forceful epithet. See here for carry the can.

The term certainly became popular during the war but there’s evidence it was known earlier in the naive sense:

I ain’t no Joe Soap to go a-believin’ of all their yarns.

Blackwood's Magazine, 1934. The writer who quoted this added, “Who Joe Soap was I have never discovered”, which suggests it wasn’t then widely known.

What might be an earlier services connection is the song Forward Joe Soap’s Army, which featured in Joan Littlewood’s musical Oh What a Lovely War and in the film made of it. Despite claims that the songs in the play were authentic First World War creations, I can find no reference to it before the play was first performed in 1963.

However, it wouldn’t have been an anachronism, since the phrase can be traced to the nineteenth century as a generic name for someone unknown, or a pseudonym that was adopted by somebody wanting to stay anonymous.

A man whose real name is unknown, but who is known in the district as “Joe Soap,” had on Tuesday evening crossed a field near Meltham, to get to Bingley Quarry, but in the dusk, mistaking his position, he fell into the quarry, and was killed.

Witness then went across the road to him and told him to be quiet, and defendant who was using very bad language, put on his coat and got into his trap. Witness then asked him his name and he said “Joe Soap, that will do for you.”

Nobody knows for sure where this generic name comes from.

The first part has been widely used to refer to an ordinary person — Joe Bloggs, Joe Blow, Joe Sixpack, Joe Average, ordinary Joe, Joe Doakes, Joe Public — there are lots of examples, though most of them originate in North America. Joe was noted in Britain as a generic term in 1846, albeit in a different sense, when it appeared in The Swell’s Night Guide: “Joe, an imaginary person, nobody, as Who do those things belong to? Joe.” The unknown-person sense of Joe Soap might have come from it.

It is usually assumed that the second part is rhyming slang for dope, a stupid person, though this would have been improbable in the nineteenth century. Though a couple of examples of dope with that meaning are recorded from the dialect of Cumberland in the 1850s, it wasn’t then widely known in Britain. In that sense it was imported later from North America.

My thanks to Peter Morris, Garson O’Toole and Jonathan Lighter of the American Dialect Society for their contributions to revising this article.