Q From Bob Fleck: An item circulating online under the title Interesting History claims, “They used to use urine to tan animal skins, so families used to all pee in a pot and then once a day it was sold to the tannery. If you had to do this to survive you were ‘piss poor’.” This screams of folk etymology. Can you offer real clarity?

A It certainly might be a folk etymology, except that the piece is in its intention merely a mischievous attempt to deceive its readers. However, as with other tongue-in-cheek suggestions about origins, a grain of truth exists in it. Urine has been widely used in many parts of the world in the preparatory stages of tanning, in particular to help remove the hair from hides before applying tanning agents. 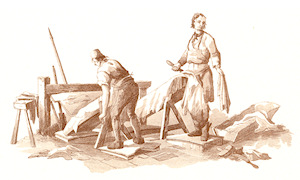 The Romans, for example, collected urine for this purpose systematically and even put a tax on it. The most famous taxer was the emperor Vespasian in the first century AD. The long-gone French public pissoirs were given the name vespasiennes as a direct link to him. Vespasian’s son is said to have objected to the disgusting origin of the tax revenues, to which in legend his father replied pecunia non olet, money doesn’t smell, a tag that from time to time is still employed to argue that money isn’t tainted by its origins.

However, the expression piss-poor is recent and has nothing to do with tanning. The current state of research suggests that it may have been invented during the Second World War, because the first examples in print date from 1946. Though it is still classed as low slang by dictionaries, its mildly unpleasant associations have become blunted by time and familiarity.

The origin is straightforward. Piss began to be attached to other words during the twentieth century to intensify their meaning. Ezra Pound invented piss-rotten in 1940 (distasteful or unpleasant, the first example on record) and we’ve since had piss-easy (very easy), piss-weak (cowardly or pathetic), piss-elegant (affectedly refined, pretentious), piss-awful (very unpleasant) and other forms.

Piss-poor began life in a similar figurative sense for something that's third-rate, incompetent or useless, as it does in this recent example:

Larkin’s letters, wrote Philippe Auclair, writer and broadcaster, were “very funny, very beautiful, and very sad; the grace of an angel, the precision of a geometer, and the short-sighted, intolerant piss-poor idées fixes of a provincial buffoon”.

Americans who know the idiom so poor he didn’t have a pot to piss in, sometimes in the fuller form ... or a window to throw it out of, might wonder if this is the origin. The idiom appears in Nightwood by Djuna Barnes, published in 1936, so it does predate piss-poor. However, it’s a graphic literal reference to poverty; as piss-poor was first used in a figurative sense, it's unlikely to have been influenced by the older idiom. In fact, the literal sense of extreme poverty for piss-poor didn’t come along until a couple of decades later, which also provides another reason, if one were needed, that the story you quote is nonsense.