Q From Brenda Malkiell: I've long wondered whether the expression to pull the plug refers to the sink or the electrical socket. Any ideas?

A I'm assuming that you mean the expression in its figurative sense of stopping some activity or bringing something to a sudden end:

Exports were unlikely to be affected if Britain were to pull the plug on EU membership following the referendum due in 2017. 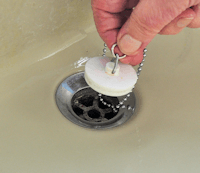 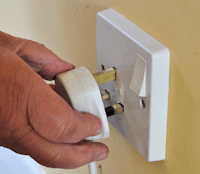 Which sort of plug is it?

When we use the expression today, it most directly evokes a mental image of the electrical sense, but this — as your question implies — might not be the origin. Plugs in barrels, tubs and basins have been around a lot longer than those used with electrical power and the earliest appearances of pull the plug in the literal sense are from the eighteenth century, if not before.

There’s no consensus in the reference works, though several explicitly link it to electrical plugs. The Oxford Dictionary of Idioms suggests yet a third origin: “This phrase alludes to an older type of lavatory flush which operated by the pulling out of a plug to empty the contents of the pan into a waste pipe.” I remember my mother in the 1940s using pull the plug to refer to this action, even though by then it actually meant pulling a chain to release a swift flush of water from an overhead tank.

The figurative sense of pull the plug only began to appear (in the US) in the second decade of the twentieth century and didn’t become at all common until the later 1920s. By then electricity was widely available, at least in urban areas, and the concept of pulling a plug out of a power socket was widespread — few early sockets were switched and physically removing the plug was the accepted way of removing power from an appliance.

The earliest example I’ve been able to find, which presumably refers to the Zimmerman telegram of 1917 offering Mexico part of its old territory in the US if it supported Germany against America in the First World War, gives no clue to the source of the expression:

Germany by one telegram pulled the plug out of the world and mobilized a world against her.

Gerald Stanley Lee, writing in the Saturday Evening Post in May 1918.

Most of the examples from the 1920s refer to financial transactions, as here:

“When you first made those contracts, it looked as if you could resell —.” “Yes — and then they pulled the plug.”

This one from five years later does imply water running away:

I took my two millions and put them in Florida land, buying stuff that scares me even now to think about. When a company took over my holdings at four millions I got out, then somebody pulled the plug and away went the Florida fortunes.

None of the early examples are sufficiently unambiguous for us to be able to say for sure whether electricity or water gave birth to the idiom. It's more than probable that both were involved: the mental link with something vanishing, as down a plughole, probably came from water, while that of sudden cessation was more likely to be from electricity.