Q From Stephen Slade. Washington, DC: I’m interested in the origin of ruckus, as in “There was quite a ruckus in the bar until the police arrived.” It’s more American than English I think? Can you comment?

A It’s certainly American in origin, though it’s now widely known throughout the English-speaking world:

The gardai got jostled and pelted with snowballs. A cameraman who was busy following the ruckus slipped on the thawing ice.

Irish Times, 8 Dec. 2010. The gardai, formally the Garda Síochána, are the Irish police.

As these examples and yours show, it means an uproar, row, quarrel, disturbance or commotion. It goes back a long way, to the 1880s at least. Early instances, into the 1920s, are variously spelled rucus, rukus or rookus, which hint at the way the word was said by various communities throughout the US. A couple of early examples:

It is but right that they should know how the matter stands, and have fair warning to avoid a “pending” rucus of some sort.

Boys of that age always has to raise a rukus somehow.

Modern dictionaries try to avoid the easy cop-out of a comment such as “origin uncertain”, but the evidence is inconclusive. 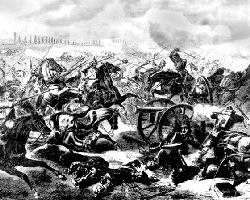 Too organised and too big to be a ruckus

There are hints that ruckus grew out of earlier words, likewise of obscure ancestry. Rook, perhaps, a Scottish word recorded from 1808 that meant a quarrel or uproar. Or ruction, of much the same sense, which appeared at about the same time and was a dialect term of Scotland, Ireland and parts of England. Either could have been taken to the US by emigrants. Some writers have suggested that ruckus was created within the US by blending ruction with rumpus, a noisy disturbance or row that’s recorded from the middle of the previous century.

Ruck is known in British English as a term in rugby for a loose scrum and also for a quarrel or fight. These look like shortened forms of ruckus. The latter is indeed thought to be from ruckus (though the rugby one might have influenced its creation) but the other has a separate origin.It’s from a Scandinavian word for a pile or stack, usually of fuel, its first use in English. By the sixteenth century, it described a crowd of people or a close-packed group of horses, but without implications of violence. The specialised rugby sense came along early in the twentieth century for British rugby and more recently still for a style of play in Australian football.