Q From Bill Waggoner: We are doing some home renovations and were looking at lighting options. Sconces were one of the items we considered. I was curious what the origin of the word is but when I looked it up the meanings were a weird collection: a wall bracket, a skull, or a punishment. Strange dictionary-fellows indeed. Can you help clear it up?

A It’s even more weird than those suggest, because the word originates in the Latin verb abscondere, to hide, from which we also get the verb abscond, originally and specifically to flee into hiding. 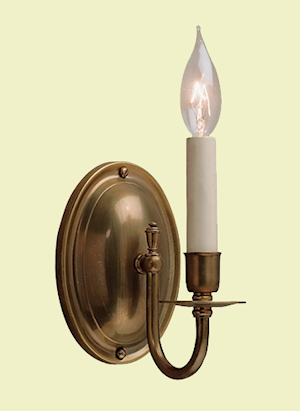 In Latin the term absconsa laterna literally meant “hidden lantern”. We used to call this in English a dark lantern, a portable device with a door that could be closed to obscure the light when needed. The Latin name was shortened to absconsa and after many centuries became the Old French esconse. When it turns up in English at the end of the fourteenth century, as sconce, it referred to a portable lantern with a handle. Not long after, the name was transferred to a wall bracket for holding a candle, often with a mirror behind it to reflect the light. The light source is nowadays often electricity but the name stuck.

In the sixteenth century, sconce became a slang term for a head:

A curled Sconce he hath, with angrie frowning browe.

Most dictionaries avoid explaining how this came about. However, there was another meaning of sconce, one you don’t mention, for an earthwork or fortification. This has a different and unconnected origin, the old Dutch schans, brushwood. It could be a bundle of sticks, a screen of brushwood for soldiers or a protective earthwork made from gabions, cylindrical baskets filled with earth. (It’s also the source of ensconce, to settle somebody in a safe or comfortable place.) In this context, sconce seems to have shifted to refer slangily to a type of helmet as protection for the head and was then transferred to the head itself. This association was made specific in the 1823 edition of the slang dictionary Lexicon Balatronicum: “Sconce. The head, probably, as being the fort and citadel of a man: from sconce, an old name for a fort.” Despite some dictionaries, it doesn’t seem often to have been used for a skull, if ever. The other linked figurative meaning was of a function of the head, one’s intelligence, brain or native wit. A pig-sconce was once a foolish or pigheaded person.

So far, so good. Now to the punishment sense, which is associated specifically with the University of Oxford. This is the way it was described by John Camden Hotten in the 1874 edition of his Slang Dictionary:

Sconce, to fine. Used by Dons as well as undergrads. The Dons fined or sconced for small offences; e.g., five shillings for wearing a coloured coat in hall at dinner-time. Among undergrads a pun, or an oath, or an indecent remark, was sconced by the head of the table.

Sconcing still exists in some colleges in Oxford in a minor way; a piece in the student newspaper Cherwell in 2007 noted it was most common among rowers (that is, sporting persons in boats, not those of a quarrelsome disposition) and one in The Telegraph in 2013 associated it especially with crewdates, social events for Oxford sports teams.

This sense puzzles etymologists. A clue may be in a work by a contemporary of Shakespeare named John Minsheu; in 1617 he published a monumental dictionary in eleven languages, which was, incidentally, the first book ever sold by subscription. He defined sconce to mean “to set up so much in the buttery book upon his head to pay for his punishment”. The buttery book was the ledger that itemised purchases of food and drink by undergraduates from the college buttery (which has nothing to do with butter but was historically the place where the butts, large barrels, of ale were kept). The book would seem from this to have also recorded fines. “Upon his head” we may presume refers to the entry in the book which was headed with his name. So this usage may be linked to the head sense of sconce.

The same sense appears in another long-obsolete phrase, build up a sconce, to run up a big bill at an inn or tavern, especially with the intention of never paying it, and in the related verb sconce, to defraud somebody.