Q From Alistair Archibald: At the age of 37 I can’t believe that I have never queried or pondered the origin of the word see-saw, the child’s playground toy, known to some Americans as a teeter-totter, until the other night when reading a book to my daughter in which two bears were playing on one. I had assumed it to be a nonsensical reduplicated compound (I learned that phrase from you!) but the picture in the book made me think of the visual sense of see and saw. The bear at the “up end” of the see-saw had a good view whilst the one at the “down end” didn’t, thus “up bear” could see but “down bear” saw, past tense. Is it as simple as that?

A You’re right that see-saw is a reduplicated compound. And I like the author’s reinterpretation of the saying. But the evidence says it’s the see part of the expression that’s the nonsensically reduplicated bit and that saw refers to the wood-cutting tool, not to having seen something. 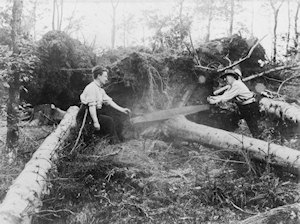 Might this have been the origin of see-saw? These two men are sawing a fallen tree using a two-handled saw.

The connection was first mentioned in a play by Richard Brome, The Antipodes, first performed in 1638. Later references support the idea that it may have been part of a chant, a work song, used by pairs of sawyers to keep their rhythm while alternately pulling a big two-handled saw. They might have been working on the level or they could have been pit-sawing, with one man above the other.

Brome’s version of the chant goes “see saw, sacke a downe”, while another from about 1685 records “see saw, sack a day”. A third is in another play the following century, Gammer Gurton’s Garland, as “See Saw, sacaradown, / Which is the way to London town?” With this example it had turned into a children’s rhyme, with a version of another rhyme, “See-saw, Margery Daw”, turning up in the same play.

Nobody knows when the playground see-saw was invented. The evidence from language is very late, with the first explicit references not found before the early nineteenth century. But so basic a play toy must surely be very much older. Iona and Peter Opie conjecture in The Oxford Book of Nursery Rhymes that it may have arisen through children watching sawyers at work and borrowing a plank and a log to play out their up-and-down motion. But this must surely be no more than a guess based on its links with saw.

The device certainly predates the word see-saw, which is the successor to another reduplicated term — the one you mentioned that some Americans have retained — the splendid teeter-totter. Various spellings of it are recorded, one being the East Anglian teeter-cum-tauter and another titter-totter. The latter is the oldest known version, which is first recorded in John Palsgrave’s Lesclarcissement de la Langue Françoyse of 1530. In that, it’s given as the English equivalent of the old French balenchoeres (now balançoire), from balancer, to balance.