Q From Lance Schulz: I just recently discovered your site, and love it! Here’s one I’ve always wondered about — why are left-handed baseball pitchers referred to as southpaws? And, why aren’t right handed pitchers called northpaws?

A As it happens, northpaw turns up often enough that it has been recognised in at least one slang dictionary and has an entry in the Oxford English Dictionary. As you’d guess, it’s usually intended as a joke, but not always signalled as such:

In fact, the Fishers are missing left-handers entirely, as all 13 pitchers who began the year with the club are northpaws.

I may not be the very best person to answer the first part of your question, as I am uninterested in any sport that runs the risk of raising a sweat, even vicariously. And as I come from a country in which baseball is almost never played, my knowledge of the game could be written in felt-tipped pen on the back of a torn postage stamp. But as this is a language question, not a sporting one, perhaps I may be allowed to discuss the matter.

The usual story about southpaw is set out in a standard work on the game:

The oft-repeated etymology of the term is that it derives from the “fact” that ballparks were laid out with home plate to the west, which meant that a left-handed pitcher faced the west and threw with his “southern” limb. This westward orientation kept the glare of the afternoon sun out of the batter’s eyes and out of the eyes of the customers in the more expensive seats behind the plate during a game. 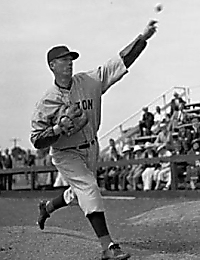 Nobody conversant with the history of the game now believes this. It seems likely, Dickson comments, that the story was the invention of either the political humorist Finley Peter Dunne of the Chicago News or Charles Seymour of the Chicago Herald. Dunne’s biographer says that Dunne invented it about 1887 because the Chicago ball park happened to be laid out that way; H L Mencken noted in The American Language that Richard J Finnigan, publisher of the Chicago Times, attributed the term to Seymour.

Other reports suggest that the term was applied to a pitcher simply because he was left-handed, with the term being already known from elsewhere. Paul Dickson quotes Tim Murnane, a left-handed pitcher, as saying that the local newspaper in St Louis began to refer to him as a southpaw in 1876. I can’t find a reference to him in the archives of the paper that year, but another contemporary comment from the same paper shows that it was used for other players than just the pitcher. It adds support to the view that the story about the orientation of ball parks was an invention:

The following good players have been engaged: Redmond, the little gallant short stop, with his south paw, who, by the way, is the “daddy of them all,” as his record of last season placed him on top of all the short stops.

Earlier examples, in fact, make no mention of baseball. One in the Milwaukee Daily Sentinel in August 1870 lists seven local newsboys, one of whom, James Sullivan, was nicknamed South-Paw. The OED has another, from 1848, referring to a heavy blow with the left hand (though the application of the term to boxing had to await the twentieth century). The earliest so far known is this, unearthed by Benjamin Zimmer very recently (October 2009):

“Luk here mon, and convince yourself,” said he, holding up the Tickler, in the right paw, between the ceiling and the floor, and with the south paw pointing to the “bow, vow, vow.”

The Tickler, 30 Jun. 1813. The Tickler was a comic newspaper published in Philadelphia. The speaker, Honest Bob, was commenting on the way that Yankees pronounced their Ws as Vs.

Having rebutted the tale about the orientation of ball parks, I am left with no good explanation for where southpaw comes from. Nothing in the early examples gives us a clue. Conclusion: origin unknown. Sorry.