Q From Austin: How did the word Spelunking come about? I know that it means exploring caves, but I have no idea how it came to be or why it means that.

A It’s American and — I suspect — a learned joke.

There are two words that refer to exploring caves. The older is speleology, with its derived speleological and speleologist. These have been around since the middle 1890s and were brought over directly from French, where pioneers such as the lawyer Edouard Martel had explored caves from the 1880s on; in 1895 he founded the Société de Spéléologie. French got the words from Latin spelaeum, which variously meant a cave, cavern, den, or grotto (it derives from Greek spelaion, a cave). These days speleology refers in particular to the scientific study of caves, as opposed to hobby or sport exploration, though that wasn’t necessarily true when it first appeared. 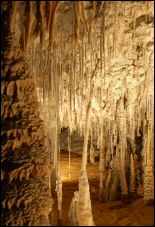 This public cave in Tasmania would hardly be a challenge for even the most inexperienced spelunker.

Your term, plus spelunker for a person who does it, came along in the early 1940s in the US for somebody who explores caves as a hobby. It is said to have arisen in New England and was presumably based by some learned person on a different classical Latin word, spelunca, which the Romans took over from the Greek spelynx.

Spelunk for a cave, borrowed from the Latin via Old French, did briefly exist in English but was last recorded in 1563 (though the related adjective speluncar had a brief flowering in the nineteenth century). It is also just possible that the originator knew of the Dutch spelonk or the equivalent Middle High German Spelunke (in modern German the later is a slang term for a dark and dirty pub, a low dive).

The noun spelunker is very slightly older in print than the verb spelunk:

Spelunkers Peterson, Surer and John Wingfield first conceived their expedition two years ago when they penetrated School Cave to the edge of Its first chasm, known as the “Jumping-Off Place.”

Spelunk first turns up in print in a tortuous bit of wordplay that began a news item in the Salisbury Times of Maryland just a month later: “Spelunkers spieled tales of spelunks today for the nation’s first conference on speology [sic].” Both words were used in reports of the conference in Time and Newsweek and this did much to popularise them.

Within caving circles, I’m told, spelunker now means an unknowledgeable and untrained amateur explorer; the more experienced prefer to term themselves cavers, which is also the usual British term. Scientists and cavers who explore with serious purpose continue to call themselves speleologists.