Q From Eiður Svanberg Guðnason, Faroe Islands: Could you enlighten me about the origins of the English expression steam radio? Was the term born with television to distinguish the old “voice radio” from the new medium?

A That’s pretty much it. It was coined in the UK no later than the early 1950s at a time when television was the coming medium. 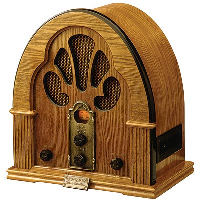 The pioneers of television considered radio, or sound broadcasting as it was called in the BBC at the time, was old-fashioned and out of step with the times. It was also a period in which steam locomotives were being phased out on British railways and in which steam power had gained the image of a technology that was moribund and characteristic of the previous century. The equation of steam with old-fashioned most probably occurred to several people around this time and we may never learn whose fertile mind came up with it first.

This is the first appearance in print I can find:

Another instance, Fellows of Colleges, directors of companies, headmasters of public schools, all those who would have qualified for the franchise a hundred years ago, have wireless but not television sets. Therefore the television programme “In the News” has a freedom of discussion which would be impossible on “steam radio.”

These are among its other early appearances in print:

Today radio broadcasting is so commonplace that the TV men speak of it patronisingly as “steam radio”.

Recollections of the Cambridge Union: 1815-1939, by Percy Cradock, 1953. Despite the title, the personal memories of Sir Percy Cradock CGMG, as he has since become, don’t go back that far. He has spent his life in public service, being at one time the UK’s ambassador to China. One stimulus for the book was that he had been President of the Cambridge Union before World War Two.

The flight from “steam-radio” to television has become an admitted rout.

Brititish Radio Drama 1922-1956, by Val Gielgud, 1957. Val Gielgud, the elder brother of the actor Sir John Gielgud, had risen from answering readers’ letters to the Radio Times to become an enthusiastic pioneer of radio drama at the BBC in the late 1920s and to run the corporation’s drama department for 34 years.

Radio, of course, has long since shaken off this defeatist and depressing belief and is still a very important force in broadcasting, belying the critics who thought it would waste away in the face of the visual medium.

Until I came to research the term, I had believed that it was the writers of the Goon Show, Spike Milligan in particular, who coined the term as a defensive epithet for the older medium. The show used it so often, however, with sound effects, that it must have done a lot to popularise it.

Not only has steam radio been borrowed into Icelandic, by the way, but also — Harald Beck tells me — into German, as Dampfradio. Doug Meyer has noted that a similar idea exists among aircrew, who call old-style mechanical instruments steam gauges, as opposed to the glass cockpit, in which information is presented to them on computer screens.

More recently, it has become very apparent that the rise of new media is leading to scheduled channel-based television being adversely compared with the new-style online, digital, non-linear, watch-it-when-you-want type. In the UK this has led by analogy to steam television being created as a pejorative epithet. But the relative rarity of its appearances suggests that writers are independently reinventing it at need. Two examples:

[He] expressed his lack of enthusiasm for digital, based on concern about quality of reception, and advocates that viewers should stick with “steam television” for the time being.

The BBC, like everyone else, did not know what the digital future looked like. Now some things are clearer. It was said that “steam television” would die, but most people still watch their TV live and the “mixed diet” of channels still works.