Q From David Vickery: Living and working in Saudi Arabia for 12 years brought me in contact with many different nationalities. One day I was out with one of my Indian colleagues when we had a puncture and he immediately asked if we had a Stepney. Having never heard of the term I finally deduced it to be the spare wheel. It’s a term not used in the UK. Any comments?

A This odd-sounding term for what we in Britain call a spare wheel or Americans a spare tire is known in some countries of the former British empire and colonies, including India, Bangladesh, Pakistan and Malta.

The story begins in 1904. At this time, motor-cars weren’t supplied with spare wheels or tyres and motorists had to provide their own. Roads then were often very poor, punctures were frequent and few facilities existed for repairs away from base. Then as now, it was hard to replace a tyre on a wheel without specialised equipment and a spare had to be a wheel with tyre already fitted. That may sound like our common modern spare, but wheels then were often of wood or heavy metal construction and a spare was both bulky to carry and clumsy to replace.

Two entrepreneurs, Thomas Davies and his brother Walter, who ran an ironmongery business in Llanelli in south Wales, came to the rescue by inventing a clever device. It consisted of an inflated tyre on a circular metal rim without spokes. The motorist clamped it to the rim of the wheel that had the flat. In a share prospectus in December 1906, the brothers claimed “No levers or spanners are required to fix it. It is firmly secured by two simple butterfly thumb screws” and added that cars didn’t require jacking up to get the spare wheel on. 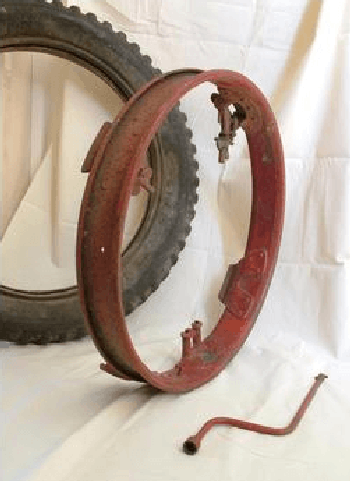 Above: A Stepney spare wheel and tyre (Image courtesy of Carmarthenshire Museums); Below: Advertisements from 1907 and 1913 (Images courtesy of Grace’s Guide) 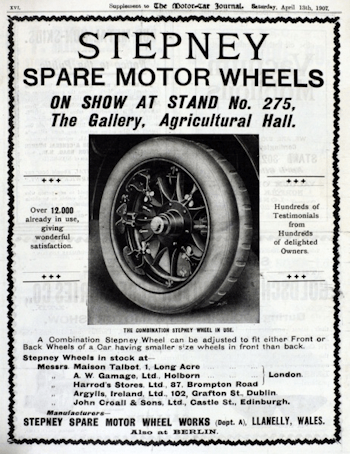 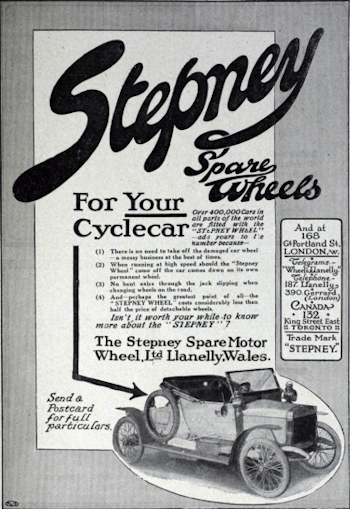 They called their device the Stepney Spare Wheel, after the location of their workshop in Stepney Street, Llanelli. They patented the wheel and started to market it in January 1906, selling seven in the first month. By August that year, almost without advertising, they were selling 1,000 a month and realised they had a success. They formed a company, the Stepney Spare Motor Wheel Limited, and began to market the wheel in Britain, Europe and the British empire and colonies. They attempted the US in 1907, but like many British businesses that have tried to break into that market they quickly failed, in part because they were ripped off by local imitators.

Elsewhere, they enjoyed great success. In a court case in 1911, it was said that in Britain alone £250,000 worth had been sold (equivalent to about £25 million today) and that the wheels were seen on nearly every motor-car on the road. In 1912 the firm was claiming that 99% of all taxis in the world were fitted with Stepney spares. The business died out in Britain after the First World War because manufacturers began to provide proper spare wheels that were relatively easy to fit. However, in many countries, Stepney became synonymous with spare wheel and, as you’ve discovered, in some it remains common, though not in Britain nor, for the reasons I’ve given, the US.

For British people today, Stepney means only the east London suburb, which has led one researcher to falsely connect the device to the Stepney Ironmongery Company, which was situated there in the same period. It does seem odd that the name turns up in south Wales but there’s a good reason for it. Stepney had become a surname in London — like so many it had been borrowed from the place where the family originally lived. One member of the family went to south Wales in 1559; that branch became prosperous landowners and baronets (their Georgian house in Llanelli has recently been restored and reopened) and in the nineteenth century they developed the town as a port and industrial centre based on coal mining and tinplate manufacture. They provided the first mayor and paid for the coat of arms of the borough in 1912. One website claims that the fame of the spare wheel led to a picture of it being incorporated in the arms; not so, though it did appear on the borough’s badge and a blue and yellow chequered pattern on the coat of arms repeated part of the arms of the Stepney family.

They gave their name to Stepney Street and other locations in Llanelli and so indirectly to an almost forgotten episode in motoring history and an odd linguistic survival.