Q From David Burry, Montreal: Hi, Great site! Any idea where the word sundae comes from? As in ice-cream sundae?

A Responding to this one seemed easy, since the straightforward answer is that sundae is no more than a respelling of Sunday. 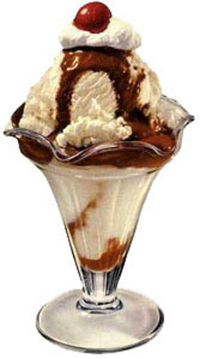 What I didn’t realise is that providing a fuller answer with some context to it was going to drop me into the middle of a culinary and etymological battle between US communities empassioned with civic pride. The early history of this classic American dish is befogged by claims and counter-claims and bedevilled by a lack of firm evidence. (What is it with foodstuffs, by the way? Whether it’s hot dogs or hamburgers, cocktails or ice cream, controversy and disagreement abound.)

Anyhow. Let’s get some facts sorted out. The first known appearance of the word sundae is this:

Peach Sundae. Ice cream, vanilla or peach .. 5 ounces. Crushed or sliced peaches .... 2 ounces. Serve with a spoon. Pear, orange, raspberry and other fruit sundaes are made by adding the syrup or fruit to the ice cream.

Modern Guide for Soda Dispensers, by Wesley A Bonham, 1897.

But the same or a similar dish is certainly known earlier. This is where matters get contentious in a gentlemanly sort of way. The cities of Ithaca in New York State, Evanston in Illinois, and Two Rivers in Wisconsin have all competed to be its originators.

Ithaca has a particularly powerful claim both to inventing the dish and creating a name for it. A advertisement in the local newspaper has been widely mentioned and reproduced:

Ithaca Daily Journal, 5 Apr. 1892. The new dish was described in the paper on 11 April as “ice-cream served in a champagne glass with cherry juice syrup and candied French cherries on top”; another ad of 28 May promoted the firm’s strawberry Sunday. A letter of March 1894 survives from a Washington patent attorney, showing that the firm had tried to trademark Sunday for its ice cream concoctions, but was unsuccessful. 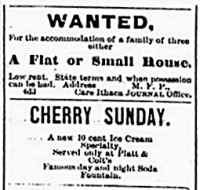 The story associated with its creation is extraordinarily detailed, based in large measure on a letter of 1936 written for the record by DeForest Christiance, the soda fountain clerk at Platt & Colt in 1892. He wrote that on Sunday 3 April 1892 the Reverend John M Scott visited the store and was served with a bowl of ice cream. The proprietor, Chester Platt (who was the treasurer of Mr Scott’s church and a friend), topped it with cherry syrup and a candied cherry in an attempt to provide something a little special. Scott suggested that this delicious new dish be named for the day it was created — hence Cherry Sunday. We must be suspicious of the details of this anecdotal claim, made nearly four decades after the event, but the newspaper evidence shows that the name became known in Ithaca almost immediately.

Whether the competing claims of the other cities to be the creators of the dish have merit, I’m ill-placed to judge and don’t intend to try. It is often said that the term was invented because the dish was originally only served on Sundays, as a way to circumvent local edicts against serving ice-cream sodas on the Sabbath. This story is particularly associated with the staunchly Methodist Evanston.

But the evidence of these printed sources makes the claim of Ithaca to be the birthplace of the Sunday a strong one. What we don’t know for sure is whether it was this word from this community that became the basis for the later sundae.

Why the spelling was changed at all is also unclear. It’s said it was out of deference to religious people’s feelings about the use of the word Sunday for commercial purposes. Or it might have been through an attempt by some seller to differentiate his product from that of the competition, only to sadly see it become generic. The spelling Sundi is also on record, though it is very rare. In a few places, notably around Fitchburg and North Adams in Massachusetts, they were advertised in the late 1890s as college ices.