That’s all she wrote

Q From Nicholas Brandes: I couldn’t find anything specific about that’s all she wrote except that it might have a World War Two epistolary basis. Do you know anything definite?

A You want “definite”? With etymology, it’s often difficult even to get as far as “vague”. As it happens, it’s easy to come to a firm conclusion about this one, so long as you fall in with the majority view. However, I’m always suspicious of the majority view and — as we shall see — it turns out to be wrong.

Let’s be clear to start with what the expression means. It always has an implication of finality about it, though it can be variously translated as “that’s all there is”, “it’s finished”, “it’s over”, “there’s no more”, “that’s enough”:

When it starts to get really dark — when the sky goes from blue to purple — I’m flipping back. That’s it; that’s all she wrote. I’m not walking through these woods after dark.

Skipper Tom meowing and hopping around like he had the itch. Then dumped a load of cat crap all over a lobster trap. Jack threw it overboard to rinse it, and that’s all she wrote buddy, he was jerked into the water.

When I first came across it (it’s not well known in the UK), I was puzzled by it. On the one hand it was obvious enough what it meant but why should anybody drag in a reference to an anonymous woman writer?

If you search the reference books for the answer, you’ll probably come across the story that you mention, that it’s from a bitter joke of the Second World War. An American serviceman opens a letter from his wife or girlfriend and starts to read it to his mates: “Dear John”. He stops. “Well, go on,” his listeners urge him, “read us the rest of it.” “I can’t,” he replies, “that’s all she wrote.”

Dumping letters were common enough to have been given the Dear John letter epithet at the time, though it starts to appear in the record only in 1945. It’s a nice story, but it’s a pity about the absence of any contemporary evidence for it, such as somebody on record as telling the joke or referring to it. 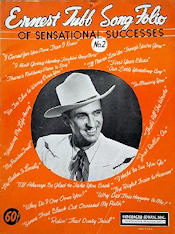 The Ernest Tubb collection of
1942 that contains the song

Another suggestion is that that’s all she wrote comes from the words of a popular song, perhaps one that linked Dear John to it. A song by Aubry Gass and Tex Ritter, written in 1950, the same year Hank Williams recorded it, has the line: “And that’s all she wrote, Dear John”. That arrived on the scene too late to be the origin. In 1946, George Crawford penned That’s All She Wrote, ’Cause the Pencil Broke, though similarly the dating confirms the title came from the existing saying. But there’s an earlier one.

A World Wide Words reader, Michael Templeton, found a song by Ernest Tubb, dubbed the Texas Troubadour, who was a pioneer of country music on radio from the late 1930s. His song was entitled That’s All She Wrote and appeared in a sheet music collection that was published by the American Music Inc of Hollywood in 1942.

American researcher Garson O’Toole, writing on the American Dialect Society mailing list, has unearthed three examples of that’s all she wrote from 1942. All derive from civilian contexts, so the prevailing view that the idiom is from World War Two servicemen being dumped by Dear John letters is no longer sustainable.

Four even earlier appearances, all from Texas, were posted on the American Dialect Society list in October 2015 by Bonnie Taylor-Blake. The oldest is this excellent example:

Ralph Buell clearly used the phrase in the expectation that his readers would recognise and understand it. The Texas Troubadour’s song is very unlikely to have reached such widespread popularity as early as 1935 and so has to be rejected as the origin. It’s more likely that it was an existing folksy saying among Texans that Ernest Tubb happened to make use of. If so, where it came from is probably impossible to discover, though researchers will keep trying.