America In So Many Words

David K Barnhart and Allan A Metcalf take us on a 500-year journey through America’s linguistic past, illustrating year by year newly minted words that have become part of the standard language, that are typical and characteristic of America, and which have frequently been exported as useful terms into other regional varieties of English. A few years are skipped at the beginning of the series, and a very few are credited with two words, so that there are well over 300 articles altogether. 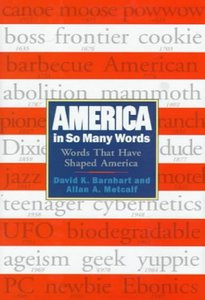 And what a range they cover: here are the true histories of groundhog, pull up stakes, drugstore, logrolling, podunk, asleep at the switch, Dixie, skyscraper, workaholic, skid row, caboose, cowboy, boondoggle, couch potato, and dozens of other words and phrases that originated in America and which evoke the New World.

The authors point out that no single person has had the authority in American English that Shakespeare has in Britain; here instead are the day-to-day words generated by ordinary people struggling with a new environment, with new challenges, and with new ways of managing their affairs. It’s a record of a decidedly democratic process of word-building and one the authors use to explain a great deal about the origins and growth of the new country.

I twitched a little at the underlying thesis of linking a word to a year, something that seemed so false when Collins and The Times employed it last month. The authors even apologise in their press briefing for including two words under 1906, teddy bear and muckraker, because they were both “too important to overlook”. If they’re important, put them in, gentlemen, and hang the system ...

Some of their choices may seem idiosyncratic: they include public school for 1636, when the term had been known for at least 50 years in Britain; mother country is in for 1617, although that is first attested in 1587 (they contend the American colonists were the first to use it of England); apple pie is the word for 1697, and turkey for 1607. These have been added to the list largely to evoke the sense of growing nationhood rather than for lexicographic reasons; indeed, the whole style of the book is patriotic, down to the title and design of the cover.

But leaving these quibbles aside, this book is a good read, well researched, and full of interesting sidelights on the country and its language. Well worth buying, if only to provide you with the evidence that finally puts paid to all that fruitless argument over the real origin of OK (1839).