The success of the first edition of the Oxford English Dictionary rested very substantially on the shoulders of a small army of what were essentially amateurs: readers who scoured books for examples of words for the OED’s editors to use as evidence in creating the entries. It might be thought that such days are over, since there are now so many electronic resources for lexicographers to call on that non-professionals without access are at a fatal disadvantage.

But a BBC television series in 2006, which shares its name with this linked book by Alex Games, proved otherwise. It was arranged in conjunction with a word hunt, looking for prior evidence of a number of terms that had puzzled the OED. Viewers with access to material that hasn’t been digitised and may never be — obscure journals, long-forgotten minor novels, advertisements, letters, even autograph albums — were able to produce some gems of antedating. 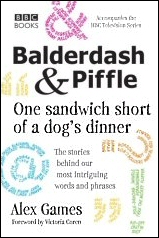 The British term bog-standard (basic, standard, unexceptional) was taken back to an issue of Hot Car magazine for 1968, proving that memories of its having first been used in the custom-vehicle field were right. A search in the archives of the English Country Cheese Council turned up references to showcards that advertised the ploughman’s lunch, not only taking the word back a decade to 1960 but proving the assertion of food experts that the term (if not the meal) was the creation of cheese marketers.

You’ll find the results of the Wordhunt written up in the final chapter of this book. We can only hope that the new series, due to begin on BBC2 in May, will produce more of this valuable data.

The main part of this book consists of eight chapters whose themes are those of the programmes in the forthcoming TV series: madness, fashion, obscure eponyms, idioms that refer to dogs, underhand dealings, put-downs and insults, words for bodily functions, and X-rated words. It is entertaining and popularly written, though you may feel the dark side of life and language is overly represented, with no shortage of rude words and words for rude things.

Do not expect great depths of research — it’s not that sort of book — since the author has relied on the OED, Partridge, and a small number of other works for his information. In several cases, this means that his dating is a bit out-of-date (those digital sources again). But the only actual error I’ve so far caught him in is his assertion that in “three sheets to the wind”, a sheet is a sail. No, Mr Games, it’s a rope.