I once heard somebody on a radio programme describe how a lady had walked out of a performance of Hamlet. When quizzed for her reason, she complained, “the writer, whoever he is, should be ashamed — it’s full of quotations.”

Much the same might be said of the King James Bible (KJV) of 1611, one of the great works of literature in the language, whose words have engrained themselves into the minds of the English-speaking people. David Crystal has written this pithily titled book in anticipation of the 400th anniversary of its publication. 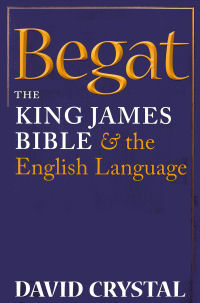 Compiled by a group of scholars at the behest of King James I of England, hence its name, it wasn’t a wholly new translation but one that took the best from its predecessors, including the Bishop’s Bible of 1568 and the work of William Tyndale and Miles Coverdale. Because it became the text read in churches (though it was never formally authorised for this purpose, despite its being commonly referred to in the UK as the Authorised Version), members of the Church of England have been exposed to its cadences for centuries. Although the language often feels ancient, it benefited from being created after English had settled down into its modern form and so remains for the most part comprehensible. Later translations have never had the same impact.

Whenever you hear phrases such as the salt of the earth, a man after our own heart, let there be light, two-edged sword, how are the mighty fallen, rod of iron, wheels within wheels, get thee behind me, Satan, new wine in old bottles, a voice crying in the wilderness, a fly in the ointment, you are hearing echoes of the prose of the KJV.

As David Crystal makes clear, however, these are not quotations but idioms based on allusions. They have entered the language, to the extent that their biblical origins have become obscured and they are used as often by non-believers as believers. They have become so fixed a part of the way we speak that — like gird your loins — they are frequently adapted for humorous effect.

But we mustn’t make too much of it. David Crystal discusses 257 idioms altogether. Though he notes that this number is greater than for any other source, including Shakespeare, in only 18 cases is the exact form found in the KJV; in the rest, the ultimate source is an earlier translation, or in a few cases the common stock of English expressions that predates Biblical translations. And he makes clear that he has restricted himself to discussing idiom, not direct quotation, stylistic influence or innovative vocabulary.