A new edition of this venerable guide always repays close study. The previous revisions of H W Fowler’s magisterial work of 1926 — by Sir Ernest Gowers in 1965 and Robert Burchfield in 1996 — led to accusations that its editors were being too kind to ill-educated speakers of English who perverted its splendour by introducing barbarous usages. This time around, apart from a few polite notices in the British press, criticism has been absent. 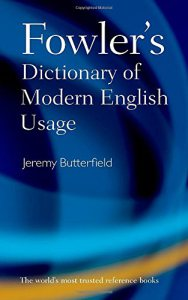 Perhaps conservatives have given up on Fowler (the brand, not the person) after Burchfield had dared to base many of his recommendations on the way people actually used English rather than the way over-careful and traditional users thought it ought to be used. Jeremy Butterfield, whose qualifications include being the former Editor-in-Chief of Collins Dictionaries, has continued his immediate predecessor’s policy of basing his recommendations on a study of Oxford’s vast collection of examples of current English. In lexicographic jargon, his work is frequently descriptive rather than prescriptive though, as he points out, the editor of a style guide is continually subject to a tension between these extremes. He remarks in his entry on less versus fewer, “Regrettably, the facts of language, as so often happens, are more complicated than simple, or simplistic, rules allow.”

A significant change, and one to be welcomed, is the replacement of much of the rather fusty and outmoded language of the first edition — unchanged by later editors who were perhaps too much in awe of H W Fowler’s prose — by fresh and warmly conversational text leavened by humour, if sometimes a little heavy-handed, and the occasional burst of sarcastic grumpiness. He comments in the introduction that every editor of Fowler has brought personal “preferences, tastes, habits, and bugbears” to his writing and Fowler wouldn’t be the same without them.

Almost every entry provides an example of his personal style. About absolutely, he says that “it is no exaggeration to say that, at least in Britain, it has altogether ousted ‘yes’ from the speech of middle-class media persons and pundits ... it is enthusiastically bludgeoning ‘yes’ to death.” Of another word that frequently infuriates, he concurs with the recent decision of the Oxford English Dictionary to recognise the figurative use of literally to mean “figuratively”, a sense that goes back at least to Dickens. But he cautions, after nearly two pages of discussion: “Knowing that your readers may have the screaming abdabs (dated British slang for ‘have a fit’) if they read literally prefacing a metaphor ... you might want to avoid using it altogether.” Under ambiguity, he writes: “some highly ambiguous — and often comical — phrasing does get into print ... and provides an easy target for satire”, including in an online forum called World Wide Words. (I must declare, in the interests of full disclosure, that he also cites me in the entry on bog standard.)

He writes about the “tsunami of illiteracy unleashed by the Internet” (though surely internet is now lower-case? No, his entry on it says it is “standard and recommended” to spell it with an initial capital letter. Many would disagree, including this writer, whose house style downcases it.) Of address, he remarks, “People in the business of not really meaning what they say love this verb” and suggests they should instead “put their head over the parapet and say that they will resolve, deal with, or sort out the question.” (Note the singular they, which he says elsewhere is now hardly noticed and an irreversible shift in usage.) He is similarly disparaging about the misuse of awesome, of issue when “problem” would be better, and challenging, which he calls “treacherous woolliness” and says should be avoided with the help of a good thesaurus.

Butterfield holds that and at the beginning of a sentence is fine, especially as a marker of a continuing narrative; usage evidence suggests that alibi no longer solely means a defence on the grounds that the accused was somewhere else at the time but can be used of any excuse, pretext or justification; to say the letter h as haitch, he argues, will eventually prevail in British English, “unspeakably uncouth though it may appear” to older speakers. Of like as a sentence filler, he remarks that “Overuse will cause listeners outside the speaker’s immediate social circle, wider social group or age cohort to ignore the content of the message, to assume that the speaker is little short of brain-dead, or, in extreme cases, to wish they had a discreet firearm to hand.”

His advice makes clear the dangers for the inexperienced writer that lie behind many innocent-looking words and phrases. But the new Fowler is worth consulting even by writers who think they know the language well. Butterfield has created a guide that is readable for entertainment as well as enlightenment.