This work is monumental in several senses. It is physically huge: 6000+ pages in three hefty volumes with ten million words, 110,000-plus definitions and 413,000 citations. Unfortunately, the price is likewise massive, which is hardly going to make it a household purchase, even at the deep discounts being offered by some online retailers. Leaving aside the superlatives, it is principally a testimony to the industry of its editor. 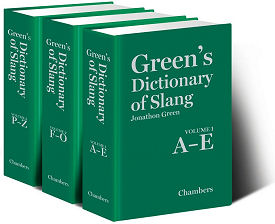 It is only right that Jonathon Green’s magnum opus should carry his name in the title. GDoS (as it is already commonly abbreviated) is an important publication in the history of slang lexicography. It’s so big because it’s that rare thing, a dictionary that records the historical development of slang. Every entry includes a range of dated citations, going back to the first firmly attested example, to show the way the word or phrase has been used through its life. Few slang dictionaries attempt this — though many include examples — because the written record of slang is poor (it is, after all, primarily a spoken medium) and a huge research effort is needed to acquire early citations. The only works I know of that are comparable in their approach, if not size, are Jonathan Lighter’s Historical Dictionary of American slang, which sadly has stalled at the letter O, and its spin-off, Jesse Sheidlower’s The F-Word. In its historical approach, GDoS matches the Oxford English Dictionary and it’s not hyperbolic to suggest that it’s the OED of slang.

Mr Slang, as Martin Amis called Jonathon Green (a cognomen that he has adopted as his Nom de Twitter) has an enviable reputation as the premier slang lexicographer of his generation. His first foray was Newspeak: A Dictionary of Jargon, published in 1983. His single-volume dictionary, already regarded as the best available and which forms the skeleton of this work, is the Chambers Slang Dictionary of 2008, itself building on The Cassell Dictionary of Slang of 1998.

GDoS is striking not only in its comprehensiveness. Though Green is more than ready to acknowledge the assistance of many individuals, his editor-in-chief Sarah Chatwin especially, GDoS is unusual in today’s publishing world in that it has been conceived and produced by one person. It is also remarkable for coming out as a printed book at all. When in 1997 he was commissioned to prepare it, print was still a natural medium for reference works. Online publication has since become the norm. GDoS may have the melancholy attribute of being the last substantial reference work to appear as a physical object. Even here, online publication is in prospect: Oxford University Press, which distributes the book in North America, plans to make it available as an e-book via the Oxford Reference Bookshelf.

Not only has publication of reference works moved online, so has much of the research work. However, Green and his helpers, his wife in particular, have focussed their attention on printed material and have spent 12 years scouring libraries for citations. Green is rightly wary of online sources for their unreliability as dating evidence, but some are usable with care and I wonder if he has yet to fully exploit their potential. While working on various word histories, I’ve accidentally antedated several GDoS terms in the month since my copy arrived.

Although he has now researched English slang in more detail than any lexicographer before him, Green has no plans to retire. He told me, “One does not finish a dictionary. One pauses. And not for long. Then gets back to work. I have already added 1500 citations and new definitions and headwords to those in the book.” He looks forward to online publication: “Unlike an e-book it will be ‘live’, with continuous revision, correction, expansion and improvement, offered in quarterly or six-monthly increments, until, as I hope, my lifeless body crashes forward on to the keyboard at some ripe old age.”