An American recently wrote to me of the problems she had had with food names while over here in Britain. What were courgettes, for example, or aubergines, or mangetout? And what was this mysterious vegetable called swede she was offered in the cafeteria? By careful questioning and observation she discovered that she knew these as respectively zucchini, eggplant, snow peas, and rutabaga. British cooks in America might equally be puzzled by arugula, which they call rocket back home, yet another vegetable that changes name in its passage across the Atlantic Ocean. 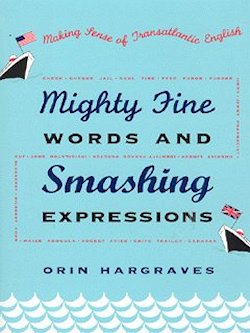 Orin Hargraves, a lexicographer with feet that are figuratively planted on both sides of the Atlantic, has produced a book that will be a great help to speakers of either regional form who are trying to resolve differences of language in business, commercial, legal and social life. Two very useful introductory chapters detail the main differences in spelling between the two Englishes. After that, successive chapters discuss the language of government and law, education, medicine and health, food and clothing, transport, sports and leisure, and everyday life. Perhaps the most immediately valuable chapter is the one headed “Things You Don’t Say”, listing the differences in taboo language between the two countries.

For example, if you’re American, don’t ask for a shag (a rather dated expression for a layered haircut) in a British hairdressers, since it is slang for an act of sex, or refer to your backside as a fanny (British slang for the female genitals); Brits in America should be careful about asking for a fag when they want a cigarette, not just because of the fear of being assaulted in a public place by anti-smoking zealots, but because it is deeply offensive American slang for a homosexual.

The set of chapter headings, though it gives an impression of the scope of the book, hardly does justice to its compendious nature. Opening it at random, for example, turned up a table of magazine names and profiles (so you know what is meant by the Beano or Redbook) and of icons of the small screen whose names have become common terms (explaining who Mister Rogers and Arthur Daley were, among others); another couple of random stabs led me to information on medical trademarks and how the names of cakes differ between the two countries; another turn of the page revealed a discussion of banking and investment terms. Pages 143-4 contain a table of fruit and vegetable names that would have helped my American correspondent greatly.