It started when I read a report by Jon Henley in the Guardian on 7 April. As part of the current British election campaign, the leader of the Conservative Party, David Cameron, was visiting a bakery in Bolton, Lancashire. He made a lame joke about his failure to make his own bread which Jon Henley rendered as “So it’ll be back to boughten loaves in future, he promised.”

Boughten is an adjective formed from the irregular past participle of the verb to buy and refers to something that’s commercially made or shop-bought, as opposed to made or grown at home. If Mr Cameron actually said it, he was using it correctly. However, he comes of upper-middle-class stock, educated at Eton and Oxford, and it’s highly unlikely that boughten is natively his. 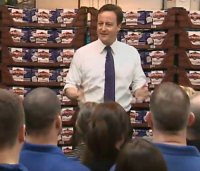 David Cameron, not saying boughten at Warburton’s bakery in Bolton

Two hundred years ago, boughten had a brief literary moment, used poetically by Samuel Taylor Coleridge and Robert Southey. Otherwise it has never been part of standard British English. It was formerly in some dialects in southern England but has now almost totally died out, with only a few very elderly men and women — especially in the West Country — still having it in their vocabularies (a newspaper report ten years ago in Bristol quoted boughten as an example of Somerset dialect that survived among old Bristolians; that may no longer be so). It has in the past been rather more widely known in North America and many examples turn up in American writings of the nineteenth century, whereas it’s almost completely unknown in their British counterparts. I’m told that it’s still used to some extent in north central parts of the US, such as Michigan — where shop-boughten may also be heard — but most Americans would consider it rustic or old-fashioned if they ever heard it.

There are a few other such relic adjectives ending in -en still in daily circulation, as Prof Larry Horn pointed out to me when I asked about boughten on the American Dialect Society’s mailing list. They often turn up in set phrases: graven image, new-mown grass, unproven allegations, clean-shaven face, misshapen bodies. But boughten has largely vanished from their number.

It was so surprising that this odd old term should be linked with David Cameron — and that it didn’t appear in any other report of the Conservative leader’s speech — that I went hunting for further information. Jon Henley admitted that Mr Cameron hadn’t actually said it; he had included boughten in his paraphrase because he liked the sound of it and because for him it had a flavour of “up north”. He knew it from his granny in Folkestone, Kent, who used to say it. That certainly fits its southern England profile, though the English Dialect Dictionary of a century ago didn’t include Kent among the counties in which boughten had been recorded. Anthony Massey of BBC News tells me that what David Cameron actually said was “So I’m going to be back in the stores buying your bread.”

I have this vision of lexicographers a century hence finding Jon Henley’s piece and concluding that if an educated Englishman used the word in 2010 it must have still been extant. I wonder how many of our current etymological conclusions, based on newspaper reports of a century ago, are likewise biased by reportorial archaisms?