Floods have caused enormous damage in parts of southern Britain in the past week or so; ironically, one result is that in one badly-hit area local residents lost their water supplies because the local treatment plant flooded. Coleridge’s couplet from the Rime of the Ancient Mariner, “Water, water, everywhere, / Nor any drop to drink”, suddenly became all too relevant.

On Monday, BBC News reported that drinking water was to be brought into the stricken area using bowsers. This term had presumably come from employees of Severn Trent Water, the water company that runs the treatment plant. BBC reporters — together with other radio and TV news broadcasters and some newspapers — felt it necessary to explain this odd term. Many journalists commented on this odd word during the week.

Bowser is rather specialist, not being the sort of word that you naturally drop into daily conversation unless you run a service station or an airport or work on a construction site. But it’s neither archaic nor rare, though it doesn’t mean the same thing in every country in which it’s used.

We owe its existence to the late Mr Sylvanus Bowser, of Fort Wayne, Indiana. Early in the twentieth century he invented what he called the self-measuring gasoline storage pump but which we have long since abbreviated to petrol pump or gasoline pump. That’s why such pumps in Australia and New Zealand (and to some extent also Canada) are called bowsers, because his firm, S F Bowser & Company, had a thriving export trade to those countries in the early days of motoring. The device consisted of a measuring pump attached to a tank that — safety considerations not being paramount at the time — could be put at the kerbside in front of a garage. 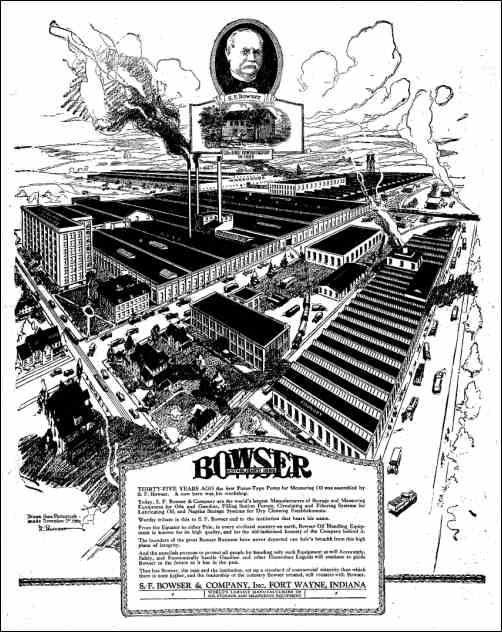 The Bowser factory in 1921, when it was claiming to be the world's largest manufacturer of storage and measuring equipment for oils and gasoline. Sylvanus Bowser, still very much in charge, may be seen at the top, proudly overlooking his creation.

In consequence, Bowser’s firm was in the business of making fuel storage tanks from early on, though it trademarked the name only in 1921. The firm later made its tanks mobile and self-propelled, while keeping the core idea that their contents would be dispensed directly to the end user. This often distinguishes a bowser from tankers that serve petrol stations, which don’t supply the public direct but pump the fuel into underground storage tanks. However, a bowser is also often just a smaller size of tanker. Bowsers became common on airfields to resupply planes, especially during the Second World War, and became well known to service people in many countries.

At some point, the usage extended beyond providing fuels to supplying water, especially in military situations and on construction and building sites. They may not have recognised the word, but many flood-affected people have been very grateful for bowsers.