It’s been a whirlwind couple of weeks for those of us involved in defining the English language. In early August 2006 we thought we knew what the word planet meant; around the middle of the month we were uncertain; by the end all was clear once more but the definition had permanently changed.

The causes were the anomalous nature of Pluto and the development of modern observational astronomy. In 1930, Clyde Tombaugh discovered Pluto orbiting beyond the then known limits of the Solar System, a discovery that was a sensation at the time. Because the initial estimates of its size were much too big, it was immediately included with the other planets. Later observations found that it was only half the diameter of Mercury, one fifth that of Earth, and that its orbit is eccentric, so that on occasion Pluto can be inside the orbit of Neptune. In recent years many similar objects have been found even further out, in the distant part of the Solar System called the Kuiper Belt, at least one of them larger than Pluto. So is Pluto a planet? And if it is, are these other new bodies also planets? And how do you define a planet, anyway?

For many people, it will seem an irrelevant argument about icy lumps of rock drifting in the outer darkness, but for astronomers a definitive answer would end a controversy that has been running for decades, with many in the field wanting to downgrade Pluto’s status. In all the history of astronomy, the word planet has never been strictly defined, because there was no need. But with so many of these new planetary objects being detected (the International Astronomical Union has at least a dozen on its list, with dozens more expected to join them), somebody had to draw a line. This was firmly done on 24 August 2006 by a resolution at the International Astronomical Union’s meeting in Prague. 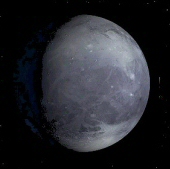 The big news was that Pluto is no longer a planet. All the reference books will have to be rewritten.

It isn’t the first time planet has changed its meaning. It comes from Greek planetes, a wanderer, and was applied in ancient times to any celestial object that moved against the background of the fixed stars. This included not only all the bodies visible to the naked eye that we still refer to as planets — Mercury, Venus, Mars, Jupiter, and Saturn — but the Sun and Moon as well. With greater understanding of astronomical realities — that the Earth revolved around the Sun, that the Moon was a satellite of Earth, and that the Sun was very different to the others — the word changed its meaning to refer specifically to Mercury, Venus, Earth, Mars, Jupiter, Saturn, Uranus, and Neptune.

As a result of the IAU resolution, there is now an official definition:

A planet is a celestial body that (a) is in orbit around the Sun, (b) has sufficient mass for its self-gravity to overcome rigid body forces so that it assumes a hydrostatic equilibrium (nearly round) shape, and (c) has cleared the neighbourhood around its orbit.

Part (c) of that definition neatly excludes Pluto, because its orbit intersects that of Neptune.