Binge-watching, consuming several or all the episodes of a television programme in quick succession, was announced by the British dictionary publishers Collins on 5 November as its 2015 Word of the Year. 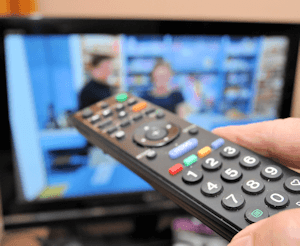 Once upon a time, we had to wait for the next episode of our favourite television show and had to be sure to catch it when it was broadcast or it was probably gone for ever. Technology has changed all that, of course, not only providing box sets for easy access to programmes we want to watch again but more recently giving online access to the whole of a new series at once.

My face is unshaven, my eyes are bloodshot and I haven’t showered in days. Such are the ravages of binge-watching. Welcome to the latest addiction affecting America. ... Other than hiding the remote or changing the victim’s Netflix password, there is no known cure.

The term derives from binge-eating and binge-drinking, terms first found in the US in the 1950s (though binge drinker is a couple of decades older and the noun phrase eating binge is of 1930s vintage). An immediate precursor was binge-reading from the 1990s.

Though binge-watching is recorded in the US as far back as 2003, it widened its popularity in that country greatly from 2012 on. In December 2013 the American Dialect Society selected it as its word “most likely to succeed”, a prediction that has proved accurate. It is now widely known wherever English is spoken:

Forget binge-drinking, the celebrated vice in Tellyland is “binge-watching” and the BBC is the latest to jump on the bandwagon. Director-General Tony Hall is to release whole drama series on iPlayer. I know it's what people want but I want to stand up for the slow burn.

Binge is itself an intriguing word, though its ultimate origin is obscure. It derives from the dialects of the midlands counties of England, such as Northamptonshire and Lincolnshire. The English Dialect Dictionary of the end of the nineteenth century notes that to soak a wooden vessel such as a cask or a tub to swell the wood and render it watertight was said to binge it. By extension a man who “soaked” himself in alcoholic drink was said to binge or be on a binge, a usage recorded from Northamptonshire in 1854.

Two slang dictionaries, in 1889 and 1890, note it in the sense of a drinking bout but it seems to have become socially acceptable in Britain only during the First World War — early examples are in letters from airmen. Noun and verb were carried to the USA a little later.

We might guess that P G Wodehouse had a hand in its adoption in the US because he was rather fond of it. However, he uses it loosely for a party, outing or situation, with no implications of drinking:

I had had experience of one or two of these binges, and didn’t want to run any risk of coming early and finding myself shoved into a seat in one of the front rows.

Binge can also be used more generally in the sense of any extended immersion in an activity or situation, such as a guilt binge or a workout binge, though this is less common.