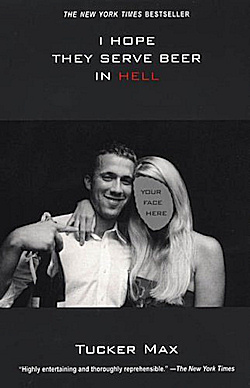 A New York Times piece in April 2006 discussed Tucker Max’s I Hope They Serve Beer In Hell: “Young men, long written off by publishers as simply uninterested in reading, are driving sales of a growing genre of books like Max’s that combine a fraternity house-style celebration of masculinity with a mocking attitude toward social convention, traditional male roles and aspirations of power and authority... [T]hey collectively represent the once-elusive male counterpart to so-called chick lit, and so perhaps deserve an epithet of their own.” The article suggested fratire.

An older term, dick-lit, might seem to have already filled the linguistic need, but that’s a more direct equivalent to chick-lit in which male narrators fret over their romantic screw-ups. That is most definitely not a state Tucker Max ever finds himself in. The introduction to his book says: “My name is Tucker Max, and I am an asshole. I get excessively drunk at inappropriate times, disregard social norms, indulge every whim, ignore the consequences of my actions, mock idiots and posers, sleep with more women than is safe or reasonable, and just generally act like a raging dickhead.”

The New York Times’ article didn’t explain the origin of fratire but its author presumably coined it from fraternity + satire.

The masculine backlash celebrated in such books has also given rise to the term menaissance.

The themes and topics in fratire aren’t appropriate for family dinner-time discussion, but the crude sexual references and tales centered on obsessive alcohol consumption are drawing plenty of twentysomething guys into bookstores.

The fratire writers are cyber-characters, who hold themselves up as a paragon of backlash — cocksure in the discovery that the more misogynistic they are, the more attractive women seem to find them.