Though the word can be traced back to 2005, it has become widely used only in the latter part of 2007. It’s a film genre whose name reflects the low esteem in which it is held by critics. In August, the International Herald Tribune said, “Specimens of the genre share a low-key naturalism, low-fi production values and a stream of low-volume chatter often perceived as ineloquence. Hence the name: mumblecore.” 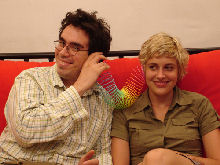 You might add ultra-low budgets, independent production, improvised dialogue and non-professional actors to the list of features. The genre, the article went on to say, is more a loose collective or even a state of mind than an actual aesthetic movement. However, it has been getting a lot of attention recently and has been named a Hot Genre by Rolling Stone magazine. The Fort Worth Star-Telegram of Texas reflected the uncertainty about its enduring value in a catchline in a story on 4 November about the Lone Star International Film Festival: “Mumblecore: The future of cinema or just really annoying nonsense?” Among the mumblecore films most often mentioned are Funny Ha Ha and Hannah Takes the Stairs.

The tiny/arty film movement known as “mumblecore” has built an entire bemused worldview out of the perspective of overeducated, undermotivated twentysomething guys who can’t commit to a declarative statement, let alone a career or girlfriend.

My big complaint about these Mumblecore movies is that they are not grounded in any sort of economic reality. Nobody works, and nobody has trouble making rent while living their bohemian lifestyle.