This word featured in an article by Ian Urbina in the New York Times on 24 December 2007. It’s a curious process that the writer succinctly described as reverse shoplifting. 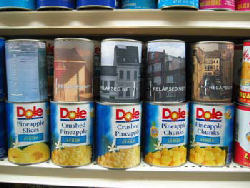 Its origins lie in a US west-coast guerrilla-art movement that wants to take over part of the public spaces of stores for artistic and political purposes. One aim is to subvert commercialism as a form of culture jamming. As one example, an artist might replace a product label with another that features a political or consumerist message.

To judge by the New York Times article, the term has since spread beyond its artistic origins to refer to any unauthorised placing of materials in stores. Some is still political or consumer activism, but the technique is now used, among others, for religious proselytising, advertising and promotion. Independent bands, for instance, put copies of their albums in stores to promote them.

Early appearances of the term were linked to the California artist Packard Jennings, one of which was as the title of an exhibition in San Francisco in March 2005 that included some of Jennings’ work. Ryan Watkins-Hughes sent me a copy of a flyer he distributed at the New York gallery Participant Inc in 2004, which is probably the earliest public appearance of the word.

Another term, which specifically refers to putting copies of CDs in record shops, is droplifting, which was coined in 2000 by Richard Holland of Turntable Trainwreck and The Institute for Sonic Ponderance.

Similar to the way street art stakes a claim to public space for self expression, my shopdropping project subverts commercial space for artistic use in an attempt to disrupt the mundane commercial process with a purely artistic moment.

At Mac’s Backs Paperbacks, a used bookstore in Cleveland Heights, Ohio, employees are dealing with the influx of shopdropped works by local poets and playwrights by putting a price tag on them and leaving them on the shelves.