This was the name of a magazine which my eldest brother brought home when I was a child. Its cover featured a line drawing of an ancient vessel in full sail, which linked the word and the craft for me. 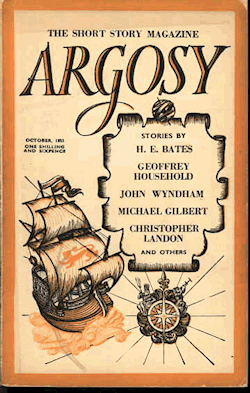 The cover of British Argosy for October 1953

The etymological link is with the modern Croatian city of Dubrovnik, which was called Ragusa until after the First World War. Together with Venice, on the other side of the Adriatic, it was an important Mediterranean trading port in the sixteenth century. A ragusa came to mean a ship from Ragusa. The port’s name was turned into forms such as Aragouse, Arragouese and Arragosa in English and this helped the transition of ragusa the ship into argosy.

By Shakespeare’s time, it had become established as the term for a merchant ship of the very largest size, especially those of Venice and Ragusa, which is why Portia is able to say to Antonio at the end of the Merchant of Venice:

Unseal this letter soon;
There you shall find three of your argosies
Are richly come to harbour suddenly.

Much later, argosy became a figurative way to speak of a rich supply of a material or something with valuable contents. It was given as a title to a literary digest, notably to the American pulp magazine published by Frank Munsey in 1882, but rather earlier to an English journal created by Alexander Strahan, which was revived in 1926 and was the one that I saw about 1948.

There’s no connection with the story of Jason and the Argonauts, who sailed on the ship Argo in search of the Golden Fleece.