Grab the nearest digital calculator. Enter the number 50714938. Now look at the display upside down. With a little imagination, you may see the word beghilos. (The calculator, of course, has to have a standard seven-segment display.) Calculators vary slightly in the way they display numbers — some leave out the bottom bar on the 9, which turns the word into bebhilos. However, beghilos has become a rather rare slangy term for what is more formally known as calculator spelling. Nobody knows where it comes from or how old it is, though I’ve found an example in a Usenet posting dated 1994. 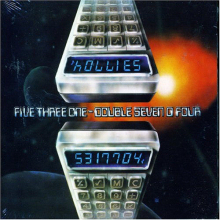 Kids have been playing with the word-creating possibilities of calculators since they started to appear in the 1970s. It didn’t take long to discover that 0.7734 upside down made hEllO. One of the earliest attested examples from this period is 5318008, which when turned over spells boobies. If your display is big enough, you can enter 53177187714, which makes hillbillies; mine has only ten digits so I get illbillies (sick goats?) and the longest word I can make is 378193771 (appropriately, illegible).

The trick is known from other countries; for example in German 38317 spells Liebe. Readers added more. Julie Egan: “A nice example in Dutch is showing off your mathematical or memory skills by knowing the answer to the following sum: 6 x 2182189. The answer 13093134 when read in beghilos reads as heleboel which in Dutch means ‘lots, a whole lot, an awful lot’.” Claude Baudoin: “In France in the early 1970s, students with calculators would say, ‘Do you know Valéry Giscard d’Estaing’s phone number? I do!’ Giscard was at the time the finance minister. When the other puzzled student said ‘No, what is it?’ the first student would type 3771350 on his calculator and show it to the other. Then he would turn the calculator upside down, reading OSEILLE. Oseille in French means sorrel, and for some reason unknown to me, it is one of the many slang terms for money.”