A review of The Last Bookaneer by Matthew Pearl produced a word new to me, one with an intriguing history.

His title term refers to literary thieves of the nineteenth century who exploited the lack of international copyright agreements to publish counterfeit editions in foreign countries. These buccaneers of the book trade were especially prevalent in the USA, reproducing new works by popular British authors such as Charles Dickens without bothering to pay for the privilege.

Matthew Pearl writes in The Last Bookaneer: “Bookaneers would not describe themselves as thieves, but they would resort to almost any means to profit from an unprotected book.” Dickens had a very public battle with piratical American periodicals and satirised their activities in Martin Chuzzlewit, the serial parts of which were reprinted in the very publications he was lambasting. 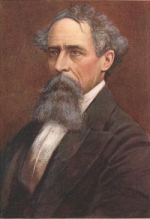 Bookaneer was coined by the poet and author Thomas Hood in a letter in The Athenaeum of 22 April 1837 under the title Copyright and Copywrong: “If a work be of temporary interest it shall virtually be free for any Bookaneer to avail himself of its pages and its popularity with impunity.” The extent of the problem was described in an American publication at the middle of the century:

No sooner is a literary venture of Bulwer, Thackeray, or Dickens afloat, than a whole baracoon of “bookaneers,” as Hood called them, rushes forth to seize it.

The Metropolitan (Baltimore), March 1853. A barracoon was a rough barracks used for the temporary confinement of slaves or criminals.

It’s curious that in an age when it was considered rather bad form for a serious writer to coin new words that bookaneer should have had the circulation it did. But it was of temporary popularity within a narrow field and there were few uses after the 1870s in the sense of a ruffianly publisher (though the word has had other senses since) until Matthew Pearl found it while writing a work about Dickens in 2009 and decided to focus on the pirates in his next work.