In the early sixteenth century, what was modestly called a lodging was built for Henry VIII on the banks of the Fleet River in London. It was actually a brick palace arranged around three courtyards. Its claim to fame is partly etymological and partly artistic.

The latter came about because in 1533 it was the scene of Holbein’s famous painting, The Ambassadors. The former was due to Edward VI, who gave the palace to the City of London as a hospital, orphanage and prison. Later it was used mainly for the short-term confinement and punishment of petty offenders and those who were regarded as anti-social misfits, such as vagrants, itinerants, vagabonds and loose women.

The palace was sited near an ancient holy well called St. Bride’s (or St Bridget’s) Well and became known as Bridewell. The name was passed on to the prison. It was later applied to the hundreds of others that were set up throughout the country on the same model, for which an alternative name was houses of correction, though these were in practice mainly prisons for the poor and indigent. The term was also taken to the British colonies. 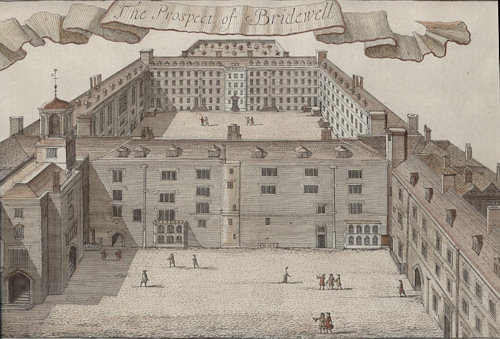 The original Bridewell, from John Strype’s An Accurate Edition of Stow’s Survey of London (1720)

Bridewells had a shocking reputation. In a biography of the prison reformer Elizabeth Fry, Mrs E R Pitman wrote, “They made a point of visiting most of the jails and bridewells in the towns through which they passed, finding in some of them horrors far surpassing anything that Newgate could have shown them even in its unreformed days.”

The term is now only historical, as the formal distinction between bridewells and prisons was abolished in Britain in 1865, though much of the work of the old bridewells had by then long since been taken over by the workhouses. But the term lives on in the names of a few police stations that were once attached to a bridewell, such as those in Bristol and Leeds; in Ireland it is still used as a general term for one.