A house recently advertised for sale near the Devil’s Punchbowl in Surrey mentioned that it had once been used by broom-squires. These weren’t the minor aristocracy of rural places that the second half of their title suggests but poor rural artisans.

They were famously evoked by Sabine Baring-Gould — Anglican priest, antiquarian and novelist — in his 1896 novel The Broom-Squire, set near the house:

At some unknown date squatters settled in the Punch-Bowl, at a period when it was in as wild and solitary a region as any in England. They enclosed portions of the slopes. They built themselves hovels; they pastured their sheep, goats, cattle on the sides of the Punch-Bowl, and they added to their earnings the profits of a trade they monopolized — that of making and selling brooms. On the lower slopes of the range grew coppices of Spanish chestnut, and rods of this wood served admirably for broom-handles. The heather when long and wiry and strong, covered with its harsh leafage and myriad hard knobs, that were to burst into flower, answered for the brush. On account of this manufacture, the squatters in the Punch-Bowl went by the designation of Broom-Squires. They provided with brooms every farm and gentleman’s house, nay, every cottage for miles around. A wagon-load of these besoms was often purchased, and the supply lasted some years. 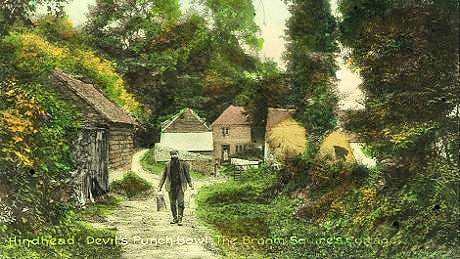 A hand-coloured postcard of about 1900. The broom-squire’s cottage is presumably the brick-and-tile one in the background, a great step up from the hovels of earlier descriptions.

Broom-squires were necessarily restricted to the heathlands of England, such as the Surrey Heaths of the story and the New Forest further south, though at times the brush of the broom wasn’t heather but birch twigs, strictly speaking turning their makers into besom-squires, a term that appears only rarely.

Squire is not a term of respect here. Alongside its sense of a country gentleman was a contemptuous one that evolved from its oldest meaning of an attendant on a knight, hence later merely a servant, and a lowly one at that. A close relative is the long obsolete apple-squire, which may be politely defined as a male companion of a woman of ill-repute, more accurately a pimp (we may guess the apple was a sly reference to the biblical Eve, though the Oxford English Dictionary suggests a woman’s breasts were meant). Broom-squires, often itinerant and always poor, had an unsavoury reputation not so far removed from the then conventional view of gypsies.

A footnote in The Sporting Review in December 1840 to an article about hunting over yet another heath, in Somerset, described broom-squires negatively as “A variety of the genus homo found on Quantock, living on whortleberries, dwarf-birch, &c, &c. Towards winter they frequent the lower grounds, and prey on game of all sorts, preferring that of their own killing.”

Other reports mention the rude huts they inhabited. The thatched sixteenth-century former gamekeeper’s cottage mentioned in the property advert was unlikely ever to have been the home of broom-squires. However, it makes a good story for the sales brochures.