The military mind is often both twisted and ingenious. A caltrop consists of four pointed legs or spines splayed out at the points of a tetrahedron so that however it falls it will sit on three of the points with the fourth uppermost. It was apparently thought up in medieval times as a way of slowing pursuit, and was updated for the motorised age earlier this century. Scatter some behind you, and pursuit becomes instantly more difficult, whether it’s on horseback or in a vehicle with pneumatic tyres. 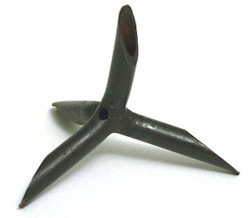 The military device, sometimes written and said caltrap, appears to have been named after one of a number of plants with spiny burrs. For obvious reasons it’s another name for the star thistle (Centaurea calcitrapa). It’s a local name for the curled pondweed (Potomageton crispus), which produces lots of winter seeds that are hard and burr-like. A plant called the water chestnut (Trapa natans) is also known as the water caltrop, which has fruit with two spines that are hard enough to penetrate the hooves of stock as well as human feet.

The word derives from the Old English calketrippe, for any plant that tended to catch the feet. In turn this comes from the medieval Latin calcatrippa, a compound either of calx, “heel” or calcare, “to tread”, with a word related to “trap” that came from one of the Germanic languages. The military sense of the word probably came into English from French.