People have been confused about the names and natures of exotic animals for millennia. The camel’s name in medieval English was olfend, a word that has been defunct for eight centuries. This was known in earlier Germanic languages and also in Old Church Slavonic (where it was taken to mean “great wandering beast”), but it can be traced back to the Latin elephantus. 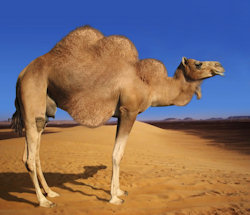 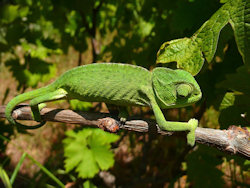 Basically, people confused the camel with the elephant, not so surprising when you’ve never seen either and you have to rely on travellers’ descriptions relayed many times.

Another confusion led to the camelopard, a linguistic cross formed in classical Greek between a camel and a pard or panther. The camelopard wasn’t thought to be a hybrid but the name was given to it because its body looked like that of a camel with spots like those of the leopard. We prefer to call it a giraffe (from Arabic zarāfa). The animal called a leopard is the result of yet another confusion — its name is lion + pard, because the ancients believed it was a cross between the two.

A camelion, however, has nothing to do with camels. The first part comes from a Greek word meaning “on the ground, dwarf”, so the animal was a “ground lion” or “earth lion”, which you may feel is an odd way to describe a small lizard. In the fourteenth century, the word became confused with camelopard because of a scribe’s error in a text read by the Bible translator John Wyclif and for a while it became identified with the giraffe. It was only a couple of hundred years ago that its name changed from camelion to chameleon under the influence of the Latin version of its name.