A ceraunograph detects lightning strikes through the radio waves they give off. The earliest reference I’ve found to this device says that it was invented in the late 1890s by the Jesuit Father Frederick Odenbach of St Ignatius College in Cleveland, Ohio. 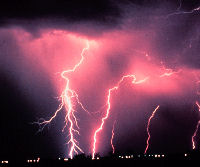 You don't need a ceraunograph
to detect this

He spelled the word with an initial c, but you may also come across the spelling keraunograph, which reflects the classical Greek term it came from. The first part is from keraunos, thunder or thunderbolt (as opposed to bronte, thunder, which turns up in brontosaurus or thunder lizard, the dinosaur now properly called apatosaurus). Keraunos was taken over into Latin and spelled with a c instead, always a hard k sound then. When it was brought into English as a word forming agent, spelled in the Latin way, it was said as though it began with an s instead.

Words in kerauno- or cerauno- are very rare. If you have keraunophobia, you have a fear of thunderstorms, though as people are more scared by the sound of thunder than by the storm itself, the alternative brontophobia would be better; the OED says a ceraunoscope is a machine for producing stage-thunder, from a Greek word meaning an apparatus that was used by the ancients in their mysteries. A ceraunite is a thunderstone or thunderbolt.

Ceraunograph has also been used for a figure or picture impressed by lightning upon the human body or elsewhere.