This word — meaning a selection or anthology — has almost been staring me in the face for years, as it forms part of the title of a book on my shelves: A Mencken Chrestomathy, a selection of the choicest writings of the American journalist and writer on language, the late H L Mencken. Other than that, you may have to search a bit before finding another example, since it is a word of singular shyness, venturing out only rarely from inside our dictionaries to slip itself on to the cover of a work here or there. 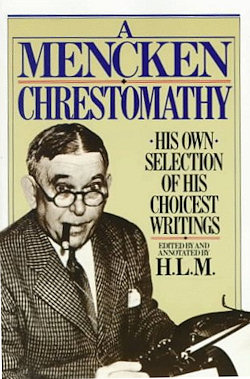 It was formed and first used in Greek, from the words khrestos, useful, and mathein, to know, hence useful learning. Its most frequent sense these days is that of a selection of passages designed to help in learning a language, so you may find titles such as Chrestomathy of modern literary Uzbek or A Chrestomathy of Pre-Angkorian Khmer.

When H L Mencken used it he claimed he did so in part to wrest it back from the linguists. To critics who argued that the word would not be understood he replied in splendid arrogance: “Thousands of excellent nouns, verbs and adjectives that have stood in every decent dictionary for years are still unfamiliar to such ignoramuses, and I do not solicit their patronage. Let them continue to recreate themselves with whodunits, and leave my vocabulary and me to my own customers, who have all been to school”.